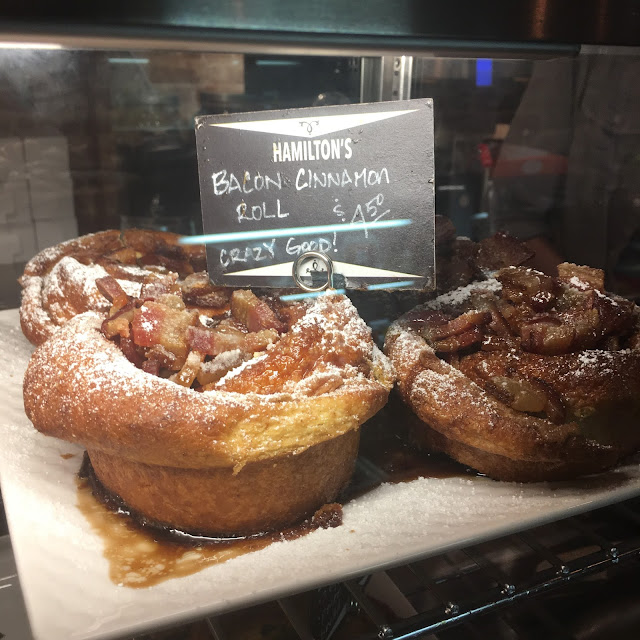 I graciously gave Hamilton's Bakery another chance after being powerfully disappointed by a lackluster Jack Daniel's muffin there a while back. As a raisinbearing foodthing, its quality could never truly surpass "aight," and despite a jazzy sign and fanfare from the cashier, "aight" may even be generous.

It promised Jack Daniel's-soaked raisins, which is as enticing as a VIP membership to Rita Ora's fan club. Here's how I described it when the trauma was fresh:

I had the "Jack Daniels Muffin" (french toast muffin/booze-soaked raisins) from Hamilton's Bakery in Harlem. Clearly, the Jack Daniels is the selling point, which is why you're reading this now. I fell for it. It's not that the whole affair was forgettable, it's that they're raisins, and there's only so much goodness that can come from raisin-bearing baked goods, as raisins, like Iggy Azalea singles, have few redeeming qualities. In retrospect, I don't know why I expected excitement and razzle dazzle from booze-soaked raisins. I bent my raisin avoidance policy for this. It was...cute. At least it was moist-ish. 6.5/10 (from my @AlexGottaEat Instagram)

But I was in a forgiving mood, and wanted a change of scenery from my usual cafe-offices. I ordered a cold brew (coffee, not beer), glanced at the display case and saw it: the bacon cinnamon roll, winking at me. Glee. Skepticism. Hunger.

And finally, curiosity: I asked the cashier, "How do you feel about this situation here?"

Him: "The bacon thing? It's freaking awesome."

But he wasn't lying and so he made it home unmurdered. It was moist and the bacon was a nice balance to the sweetness. I just wish I could have tasted it fresh from the oven, as the heating lamp did it zero favors. The maple syrup drizzle was a nice touch.
A scoop of Talenti on top would have really turned it out. If it's not fresh from the oven, you have to eat it quickly, because ain't nobody got time for a tough cinnamon roll.

...and so I may or may not have returned a few days later at the exact moment a lovely young woman was placing freshly crafted baconflowers into the display case. If that were true, the gathering of bacon in the middle would have been precisely what my soul needed, alongside the brown sugar factor, to recharge. Round two may or may not have even caused a tingle down low. Maybe.

I give it a 9/10, because in a perfect Trump-free society, the bacon and the brown sugar element would have had a hot, sweaty quickie moment in a skillet, since we're already boldly courting The Sugar. But yeah, me gustó muchísimo or whatever. Get you some.