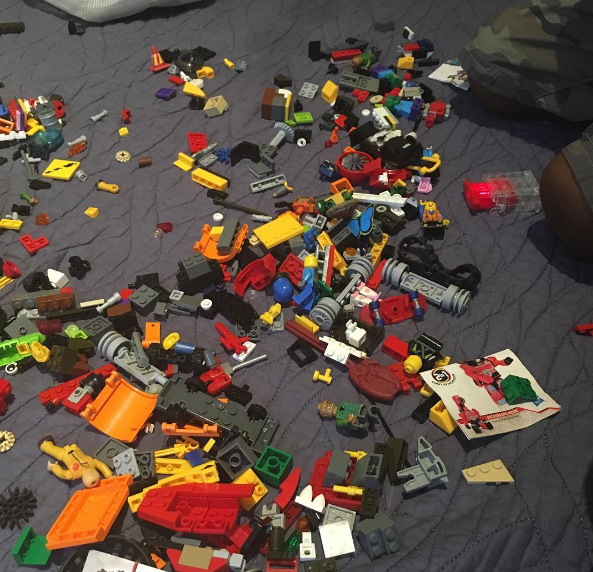 Shoutout to Legos as self-care.

Howdy. First off, congrats on making it to see another Monday. You get yet another week to eat new, delicious things and work towards being a little less terrible, if you're into that sort of thing. Either way, shoutout to you or whatever. These last few weeks have been pretty emotionally draining. Mad hateration (and murders and dastardly rat bastards running for President) in the dancerie/dance soiree. The Legos pictured above were a big part of my last week's self care situation. While at a homegirl's house, I overheard her friend's four-year-old son mention going to build in the other room. One thing led to another, and I spent a while sprawled out with this awesome and ultra-polite kid, building, feeling eight all over again. (I was mildly obsessed with Legos for a spell.) And learning to not scoff or get defensive when he took sudden interest in the all-terrain vehicle I'd built — the same one he called "cool but not as cool as mine" a few minutes prior — and partially disassembled and reworked it to fit more in line with his vision of things. There were his Legos, after all. I guess.

Anyhow, here's some goodness to offset some of the foolishness. These are a few of the memorable mental health-related essays, articles, and interviews I've come across lately. Finding commonality in someone else's story cane be calming and encouraging as hell. May your week be glorious and your skin be moisturized in Saint Damita Jo's name.

Through journaling and talking out loud, I began connecting certain dots. There were holes, large voids in my life, that needed to be filled with truth and understanding. I needed to understand the reasons why certain parts of me were off-limits. I needed to accept the genesis of the insecurities that I never let anyone see.

So many of us have given our Black children “the talk” about interfacing with law enforcement, but it seems we have to expand that conversation with an awareness about accessing and interacting with these systems (medical, legal, law enforcement) to get help for our loved ones.

"For a person suffering from depression or another mood disorder, the idea of exercise can be nearly impossible to contemplate, much less do," writes Grohol."For someone suffering from social anxiety, the idea of going outside and possibly bumping into others that may want to talk to you is daunting."

KM: That’s interesting. It’s true that not every photograph in the series screams, “I’m dealing with mental illness!” But as a whole, the series speaks to this understanding that having mental illness is something you sort of deal with silently, at least in our communities, and your viewer can understand it if they, too, are part of the club.

The researchers also administered brain scans during the testing phase. They found notable differences between anxious and non-anxious brains. While they were focused on parsing new information, anxious people showed more activation in several parts of the brain, including the amygdala, a region associated with fear and worry.

At the intersection of self-advocacy and grassroots activism, zines and independent magazines have become an increasingly popular resource to find alternative narratives of mental health experiences. Long before Tumblr communities and awareness-raising hashtags, DIY press has been filling the gaps of mainstream media, infiltrating voices and inputs from the blind spot.

This is the finished product, the result of our merged visions:

Teamwork makes the dream work. Here is a tractor with flood lights, lasers and space in the back for guns. This kid is so awesome. He wanted to build a "really really big castle" but we took a chicken break instead. #LegosAsSelfCare
A photo posted by alexander hardy (@coloredboy) on Jul 12, 2016 at 6:53pm PDT


Although this week was fraught with more mourning than any of us should realistically be able to deal with, hopefully you’ve been able to decompress in some way in order to maintain inner balance. If you’re like me, however, and no amount of attempts at attaining inner calm will ever be able to quench the insatiable fire inside you, don’t fear. The answer may be as simple as exercise.

Anxiety is a worry that worries and worries away at you until all else seems unimportant. It’s the persistent and unshakeable feeling that something isn’t right. It’s a nauseating and undefinable feeling. Sometimes the feeling attaches itself to something tangible. What if I screw up at work? What if I’m already screwing up? What if someone I love gets hurt? What if there’s a bomb inside a person like in that episode of Grey’s Anatomy and I have to keep my finger on it or else the hospital will explode?

Depression doesn't act as in containment. It infiltrates. When Darryl found out he was adopted, he felt alone. Darryl contemplated suicide and drinking was how depression manifested itself in his life. It was Darryl’s wife, Zuri, who challenged him to confront his demons head-on.

I also briefly interviewed the young engineer about the best thing he's ever made:

Legos with ultra-polite and energetic four-year-olds as self-care. #MentalHealth
A video posted by alexander hardy (@coloredboy) on Jul 12, 2016 at 6:14pm PDT


Part two of the exclusive interview

(Also, I have a wonderful podcast called The Extraordinary Negroes where I discuss life and current events and chicken and mental health and sex and fuckery and all sorts of awesome uplifting and terrible and blackety black things with my homeboy Jay Connor and some magical guests and you should totally listen to it. You're so pretty.)