Here's What The F*ck I Think (featuring Darnell Lamont Walker) 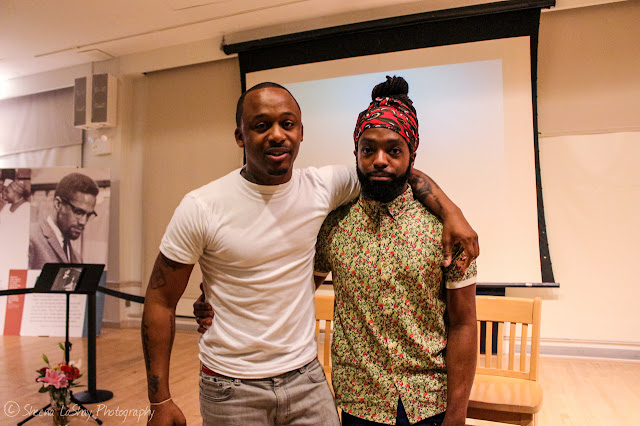 A few weeks back, I held an event called Colored Boy and Friends: Mental Health Awareness Edition at the Malcolm X and Betty Shabazz Memorial and Educational Center in Washington Heights. Yes, those Heights. The featured guests (or "Friends," because I'm so clever) at my literary showcase and conversation series situation were multimedia journalist Bené Viera, playwright and filmmaker Donja R. Love, and audio producer and founder of Bondfire Radio Keisha Dutes. I talked to each of them about their wonderful work, their mental health journeys, and how that journey has influenced their work (and vice versa). And I shared a cautionary tale about the good and terrible encounters with macaroni and cheese here in New York, which you can read over at Very Smart Brothas.
Mucho merriment y cackling and lots of feelings and such.

But as my objective was to center and amplify conversations around our mental and emotional wellness in an entertaining, approachable, engaging way, it was important to purge and cleanse my spirit, for self-care purposes of course.

And so I called on filmmaker, world traveler, and wild person Darnell Lamont Walker, pictured above, to join me for a cathartic ran moment called "Here's What The Fuck I Think" so that I could cuss and talk shit and ramble a bit. We went back and forth, taking turns getting shit off our chest. It went like this:

Alex: One. Fruit Punch is Stupid.

Alex: Three. Dear person who sees me standing in front of an illuminated elevator button and comes up and pushes the button again:

I need you to understand than your finger is not more powerful than mine. Not even white privilege can make the elevator come faster. Please die. Thank you very much.

Darnell: Four. The second slut gaming became a thing, being a hooker and stripped became just as honorable as being a philosopher.

Alex: Five. Not enough people in this world understand that where macaroni and cheese is concerned, cheese is NOT a seasoning. More on this later.

Darnell: Eight. I don't know how to feel about the fact that I cried harder when thomas jay on my girl died than I did for my favorite uncle.

Alex: Nine. Dear Rachel The Racial Stowaway,
You can wear box braids or have a mulatto chile named Langston,
you can wear raggedy Marley twists or throw black power fists,
you'll never be more than a wankster.

You can have Ashy knees or a scalp to grease with your obnoxious white woman steelo on fleek;
You can throw rap hands and Harlem Shake and twerk, stop harassing my soul, I beseech.
Your blackness is as authentic as mofongo made by Rachel Ray.
Fuck off.

Darnell: Ten. At this point, any man with colored contacts and/or an s-curl is a pedophile.


[applause and panties rained from the sky]

And then Bené Viera jumped out her seat and felt compelled reflect on her and Darnell Lamont Moore's journey as working creative folk. Great times.


Hopefully, I can make the next Colored Boy & Friends happen in September sometime.