As we're now thigh-deep in Mental Health Awareness Month, it warms my rice-loving heart to see so much openness and helpful information around such an important topic. I love that public conversations around struggles, healing, trauma, recovery, therapy, self-care, and joy are becoming increasingly common, and that folks are using the internet and social media to finding potentially life-saving support and fellowship. Being candid about my highs and lows has been both freeing and therapeutic, and I plan to continue doing my part to help normalize and amplify this stuff, because silence and shame, when mental illness is involved, can kill. And while it's awesome to see so much content and dialog this month, especially from Black folks, staying on top of your mental and emotional well-being is a year-round adventure. Here is some soul food to help you on your journey.


I had to unlearn the lie, subtlety taught to me throughout my adolescence, that things like depression and anxiety are a “white” thing (or, since I’m from Ghana, are a “Western” thing). According to Black Women’s Health, black people make up around 25% of the mental health needs in the United States (the majority being women). No one is “less black” because they are mentally ill.

Upon being discharged, I returned to Los Angeles and went back to work on Ally McBeal feeling more in control. Everybody on the show was wonderful to me, but my contract wasn’t renewed for the final season. Nobody gave me an explanation, but I assumed it had to do with what had happened. I was devastated.

Sometimes the novel is not ready to be written because you haven’t met the inspiration for your main character yet. Sometimes you need two more years of life experience before you can make your masterpiece into something that will feel real and true and raw to other people. Sometimes you’re not falling in love because whatever you need to know about yourself is only knowable through solitude. Sometimes you haven’t met your next collaborator. Sometimes your sadness encircles you because, one day, it will be the opus upon which you build your life.

You cannot be the best support system for someone else if your own mental health is impacted from their depression. For me, taking a 12-week mindfulness-based stress reduction course pulled me back from the really deep water. It helped me deal with the severe and crippling anxiety that had crept up on me trying to manage my ex-boyfriend's depression.

3. Pay attention to “the shift” — This was tricky. It’s so subtle, one could keep going as if the depressed state is as intense as ever, but really it’s the stain of depression. I suspect that this requires quite a bit of self awareness. I had to recognize the almost imperceptible difference between “I can’t” and “I just don’t feel like it.”

No matter how often we discuss police brutality, we sometimes forget to factor in the depth of the psychological impact it has. We often don’t discuss the possibility that those who experienced police brutality could suffer from a form of post-traumatic stress disorder. But given how often police brutality in the black community occurs, it should be explored.

My whole disappointment with my musical career bled over into my personal life. I had friends who told me, "You don't seem the same, you're not as outgoing." At the time, I just felt like being alone.

He’s a wonderful doctor. I never hesitate to call him, even at the slightest headache. This past summer, however, my symptoms were different: anxiety in the mornings, jealousy in the evenings, and a chronic loneliness that came and went as it pleased. I told myself to not worry about these persistent knots in my chest. Barring a stroke or a heart attack, I didn’t plan on asking for help from my doctor. Or from anyone.

I self-diagnosed this as “just stress.”

I deal with suicidal, unipolar depression and I take medication daily to treat it. Over the past seven years, I’ve had two episodes that were severe and during which I thought almost exclusively of suicide. I did not eat much and lost weight during these episodes. I couldn’t sleep at all, didn’t even think about sex, and had constant diarrhea. The first thing I did each morning was vomit.

I learned about how many mental-health professionals lack the cultural competence to treat us, and how commonly we’re misdiagnosed. Ultimately, I found out about how little we talk about mental health, regardless of how often it is challenged in our homes and lives. It’s the elephant in the room, strangling us with its trunk. 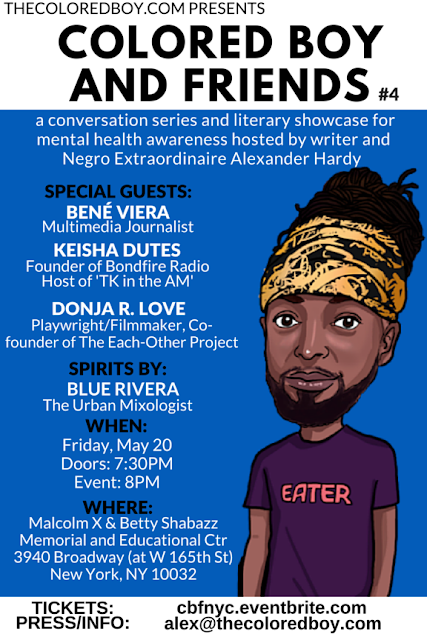 Join me Friday, May 20 in New York for Colored Boy and Friends: Mental Health Edition.
For more tickets and more información, click here.