My First Event at the Schomburg – "Resisting Limitations: AfroLatinos and Radical Identity" 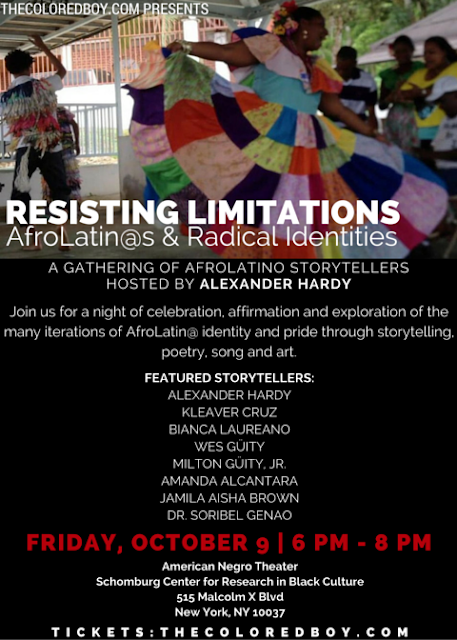 So, I'm doing a thing at the Schomburg Center For Research In Black Culture for Hispanic Heritage Month. But unlike the majority of the celebrations, lists of notable Latinos and mainstream media representations of people in and from Latin America, this will be a thoroughly Blackety Black affair.

The history of America cannot be appropriately surveyed without considering the presence, influence, hardships, victories and contributions of people of African descent. Our bodies, our lives and our genius reflect and inspire greatness, yet textbooks, media depictions and cultural celebrations routinely minimize and erase our integral role in both society and art.

To commemorate National Hispanic Heritage Month, AfroPanamanian writer and educator Alexander Hardy of TheColoredBoy.com has invited a diverse cast of AfroLatino storytellers to share stories of struggles, tragedies and progress towards/while affirming, celebrating, exploring, representing and growing to love and accept our wonderful Black and Brown selves in a world (and media environment) that studies and exploits our cultures and essence while ignoring and minimizing our presence and influence.

Resisting Limitation: AfroLatin@s and Radical Identities will showcase transformative, hilarious, tragic and insight-filled tales from powerful voices of the diaspora expressed through prose, poetry, song and art. This event aims to center and share Black and Brown narratives in a climate where such stories aren’t prominent or valued. Join us for a night of celebration, affirmation and exploration of the many iterations of AfroLatin@ identity and pride.


ALEXANDER HARDY. (Host) Virginia-born food lover Alexander Hardy is the dance captain for Saint Damita Jo's Jackson's Royal Army. He is an essayist, freelance copywriter, cultural critic, chicken enthusiast, lupus survivor, mental health advocate, and educator who informs and entertains through his colorful commentary on race, sex, sexuality, food, society and pop culture. He runs The Colored Boy, a blog showcasing his written work and documenting his travels, tragedies, and triumphs, including his work teach English and dance in Panama. Among other outlets, Alexander has written for EBONY.com, Courvoisier, CNN.com, Eater, Gawker, Saint Heron and Huffington Post, as well as Very Smart Brothas and Abernathy Magazine, where he serves as Senior Writer. He is currently working on an essay compilation. His writing portfolio can be found here. Alexander does not believe in snow.

BIANCA LAUREANO, founder of LatiNegrxs Project, is a first-generation Puerto Rican sexologist who presented both locally and internationally on various topics concerning activism, Latino sexual health, feminisms, youth and hip-hop culture, Latinos and race, Caribbean cultural practices and sexuality, dating and relationships, curriculum development, reproductive justice and teaching. Laureano is a board member at the Black Girl Project and CLAGS, The LGBT Center for CUNY, doula with The Doula Project, founder of award-winning The LatiNegrxs Project, founding member of the award-winning WOCSHN (Women of Color Sexual Health Network), co-director of BLACK PERVERT a feature length documentary film. She hosts the website LatinoSexuality.com and identifies as a LatiNegra, media maker, radical woman of Color, activist, sex-positive, pro-choice femme. Read more about Bianca on her website BiancaLaureano.com. Follow her on Twitter and Tumblr.

KLEAVER CRUZ, an Uptown, NY native, is a writer and Chief Dream Director of the NYC team at The Future Project — an organization that aims to unleash young people through the pursuit of their dreams. Cruz is also one half of the poetic duo, The Delta, which has performed at The Nuyorican Poet’s Café, Bowery Poetry Club as well served as judges for the Wordat4F Poetry Slam. His work has been featured on TravelNoire.com. racebaitr.com and African Voices Magazine, among others. Cruz believes in the power of words because they allow him to write what didn’t exist when he needed it the most. He loves being Black and Latino with the understanding that for him they are two parts of a whole.

DR. SORIBEL GENAO, before her current position as a professor at Queens College, earned a master’s degree in urban affairs at Hunter College and a doctorate in public administration at Rutgers University. Throughout her career, her priority has been to identify and promote educational interventions to help low-income children succeed at school. As an assistant professor in the college’s Department of Educational & Community Programs, Genao trains future school administrators. She works with schools in inner-city communities, like the one she grew up in, and also in some of the poorest communities in the Dominican Republic, from which her mother emigrated. She has written and spoken extensively on the value of diversity among school leaders. As a member of Friends Beyond Borders, she has led groups of New York City educators on trips to the Dominican Republic, where they examined the impact of poverty and injustice on teaching. In addition, she has also been part of Rebuilding Haiti One Trip at a Time — a non-profit organization created by former educators to promote the historical and cultural aspect of the country.

JAMILA AISHA BROWN is a proud Afro-Panamanian and international advocate. An experienced digital strategist, foreign policy analyst, writer, and social entrepreneur, she is the Founder and Lead Global Strategist of HUE, a progressive consultancy that creates full-scale digital campaigns for organizations and businesses throughout the African diaspora. Specializing in domestic and international advocacy campaigns, Jamila leads the development and implementation of all online platforms and social media outreach and engagement strategies. She builds a vibrant online presence that engages existing audiences, reaches new target audiences, and builds her clients’ online profile and socio-political impact. For the past eight years, she has worked at the intersection of public policy and digital advocacy. Her efforts have spanned the globe, with a particular interest in people of African descent in Latin America and the Caribbean. Follow her on Twitter here and here.

WES and MILTON GÜITY, JR. operate a New York City-based multi-media and video production company. Milton directs, shoots and edits short film and music videos. He is currently directing I Am Garifuna, a historical and cultural documentary that chronicles his and his father’s trips to the Garifuna communities of The U.S., Central America and the Caribbean. Wes, Executive Director of I Am Garifuna, is an excited (and exhausted) new dad who documents his adventures with his wife on their blog WesandVeronica.com. View the trailer for I Am Garifuna here.

AMANDA ALCANTARA is a writer, multimedia journalist, and community organizer currently living in the Bronx. While pursuing her MA in Communications and Latin American and Caribbean Studies, she is a manager at the McSilver Institute for Poverty Policy and Research. She co-founded La Galeria Magazine, a magazine for the Dominican Diaspora that addresses issues of identity and culture, and is the author of the blog Radical Latina. Her writing explores intersections of gender and race from a political and personal perspective. As a woman of color who grew up in the Dominican Republic, she embodies many identities, which she affirms and explores in her poetry and community theater work. Amanda is a firm believer in healing through art and fighting for liberation. A map of the world turned upside down hangs on her wall. Read more about Amanda on her website and follow her on Twitter.

For more information, ideas, opportunities or emotional reactions, holler at a player.

This is a cozy venue, so get your tickets sooner than later.