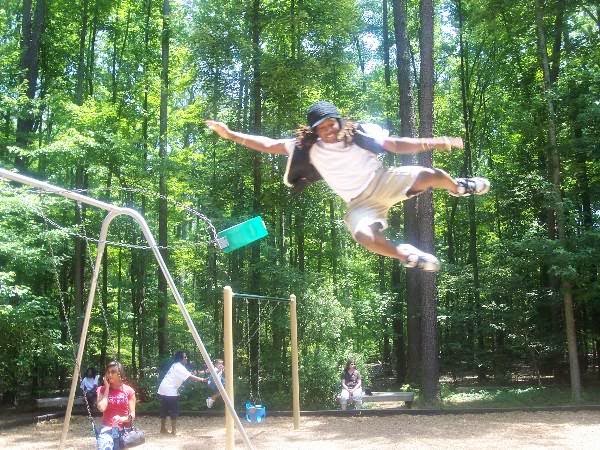 I shared this with the world for the first time on Wednesday at The Colored Boy and Friends at Bar None in New York. What a beautiful night.

On our first date, I was a few weeks on the surviving end of a deleted suicide note. I was tentative, terrified, and zombie-like. To say that I wasn’t in a good place that chilly September morning when I first entered your warm embrace would be the understatement of the century. I was flat. Drowning in hopelessness. Hopscotching towards the end of the road yet always turning back when I got a glimpse of the wreckage I’d leave behind. I could only muster excitement for chicken, sleep, dick, and more sleep. I didn’t smile much in those days. I sighed a lot.

I had spent years pretending that I could work around, over, and under my issues on my own, while still powering through my day-to-day Fuckshit. Self-imposed pressure is a motherfucker. And I, naturally, invited and invested in that shit. I convinced myself that I had to be resilient, to keep going. I convinced myself that debilitating stress was a natural part of what it meant to be an adult. Stopping and breathing became impossible, because who else was going to do the work if not me? I struggled with delegation, because bringing someone else into my chaos felt counterproductive. And it almost killed me.

One day, while cleaning up my room, I felt it. In the back of my throat. That familiar pang of terror and bewilderment and grief and confusion that means that shit is not okay. I fought it off with deep breaths and minutes spent staring at the ceiling. It grew while folding jeans and arranging tank tops, but as I tried to force it back down, that pang in my throat became a chokehold. I set the broom and dustpan down. I rocked from side to side, gripping, twisting and flinging my hands. I fought those tears. I lost.

I was heavy. I felt directionless, for the first time ever. I felt unable to DO the way Alex DOES.

And then, I met you, Therapy.

The day I met you, in my eagerness, I uncorked and rambled for an hour, terrified and thrilled and proud to be in your presence. I admitted things I had never said to anyone. I verbalized things I had never verbalized to my self. After that first session, I texted my sisterfriend Leneé, “I did it,” and sobbed violently the whole ride home, beaming, relieved.

It hasn’t been easy, this dance we’re doing here on the 22nd of Laboriousness. You try me in ways that would spell banishment for any other thorn in my side, but you? You’re different. To be frank, you breakdance on my motherfucking nerves and stir up all kinds of unpretty memories. And yet, I moonwalk back to you week after week for more scab picking and another taste of delicious emotional freedom.

Each time I strip down and peel back the scumbagginess on that dangerously comfortable couch, I feel a few steps closer to Better Personhood, like the Fuckshit hasn’t all been for naught. I completely understand how people become hooked on you to cope with being hooked on self-destruction and other methods of advancing death, because you hurt so good. I get it. Dancing with you hasn’t been easy, and it isn’t supposed to be. But the high that greets me after busting these emotions open with my Nice White Lady each week makes it all worthwhile.

It is often said that needing you indicates weakness. Over here in reality, there would be fewer Joffrey Baratheons and Justin Beibers in the world if more of us realized how far from the truth that is. You demand the analysis and shedding of self-immolating behaviors and the challenging of one’s demons. To thrive, you require unflinching self-evaluation. Price of admission: an abandonment of habitual avoidance and unconvincing Alrightness. Anything less is a waste of time for all involved. You’re a bad motherfucker, Therapy. And ain’t nothing weak about fucking with you.

I fled Panama because shit got really real and I needed to come home to recharge and rest my head within two miles of those delicious, homophobic chicken biscuits. Things took a turn for the worse sometime in September, and I went into a cave to hibernate, fuck, journal vigorously, do the therapy thing, and love on Alex, and get to know you better.

My personal challenge in October was to simply Do. Something. Anything. To get out of bed and Do. Nothing lofty like Save the World or Build a Pyramid, but simple shit that I struggled with daily and had to write on a note card and check off because I couldn’t always do them on my own:

Leave the house during the daytime

Interact with your family

Thanksgiving was ze lowpoint. I had just started taking Zoloft a few weeks prior, and was still in that harrowing Zombie Phase. I could have won free chicken for life and a weekend of cheese grits, heart-to-hearts and dance-offs with Janet Jackson and I would have replied, “Oh, cool.” The incessant jaw clenching and the suffocating anxiety prevented me from caring about the ribs or the greens or the rice or the macaroni and cheese or the jolly family members surrounding me at the dinner table. I sat there in Grandma’s dining room, surrounded by mi familia, blank. I ate quietly, eyes on my plate, uninterested in engaging in the cackling or the cake-eating or the storytelling, wishing I could teleport back to bed.

By December, with your help, doing became easier. I could become excited about things other than sleep, dick, and chicken without too much effort. The fog began to retreat. By February, I no longer had to act out emotions that I feel are expected during human interaction. My mind still attempts to fight 182 battles concurrently, but the zombiehood is subsiding. I feel like Alex again. I feel powerful and brilliant and ready to do the motherfucking work.

I expected myself to learn and perfect—as opposed to just executing—simultaneously, every time. It was an unreasonable, unhealthy amount of pressure to place on oneself. The lists that drove me to madness were a result of that pressure. These lists agitated my feelings of inadequacy. As I was never able to cross all 18 things from a list in a given day, I never felt good enough. You helped me realize that:


I wasn’t supposed to be able to do the 282 things I was attempting to do simultaneously in Panama, alone,


IT WASN’T HUMANLY POSSIBLE AND THAT DOESN'T MAKE ME A FAILURE.
SHIT.

I often felt like I quit Panama, like there was SO much I failed to do there. I can now confidently say that that is bullshit. (I slayed the scene in Panama, dammit.) Together, we’ve worked on my confidence, and I’ve progressed wonderfully in the ways I talk to and about myself. I’m using words like “career” when talking about myself, for the first time. The ideas floweth, and I’m no longer terrified by them. The bad days don’t outnumber the good ones so drastically anymore.

Your gore and your glory have pushed me to greatness. You—one of the most necessary, most rewarding, most frightening things I have ever backflipped into—have improved my life immeasurably. I’ve learned that time does not heal all wounds. Mental disarray does not clear up on its own like a Bad Boy artist’s career left by the side of the road. You have to swan dive head-first into Your Bullshit. Open those closets, whip out the flashlight and go hunting for that WHY. With you, I’ve done that. The chaos and the madness are there but so, too, are the good things and the shiny new Happy Thoughts and I’m now thankful for all of it.

I believe to my soul that I wouldn’t be above ground, here to spill these words of praise before my homies and homettes had I never accepted you into my life. Had I never called Mom and Dad that sob-filled Panamanian afternoon, I would not have made it to Thirty.