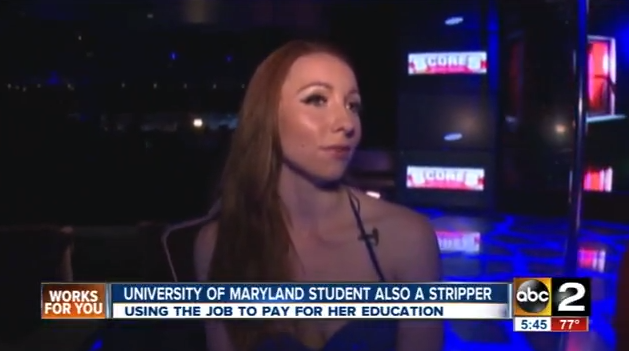 In response to my recent post on the predictable character assassination that accompanies stories involving Black victims, a reader felt that Jay and I "grossly exaggerated" this disparity in fairness shown in the reporting on White suspects and victims versus Black victims. He informed me via email that headlines are only written so unfavorably towards Blacks because "tensions are high." Whatever the fuck that means.

And while I am a wee exhausted by White deflection and foolishness, I took a moment to briefly engage with him, explaining that this gap in fairness doesn't end with dead people. I directed him to this story, which slid down my Facebook newsfeed yesterday. It looks harmless enough. I advised him that there's nothing wrong with anything found within, it's just one of those stories that you know is about a White person just by reading the headline:

This ABC story covers how University of Maryland student Maggie NoLastNameGiven funds her college education by working as a stripper in New York City a few weekends a month. I fully support this. Get it how you live, or something. It's such a kind story that would only ever receive placement anywhere but an Atlanta-based negrogossipblog were it not for its humanely presented White subject.

Look at the benevolence used to tell this story:


She’s double majoring in Spanish and political science and unlike many of her peers at the University of Maryland, she will graduate debt free. Every other weekend she takes a three-hour train ride to Manhattan to a club where she dances.

This story, like Flo-Rida fan fiction, would be impossible without Whiteness pon the scene.

In the accompanying video, notice how Maggie and the reporter chuckle like good girlfriends as Maggie reveals that she makes about $180,000 annually as a stripper, part-time. See how impressed with and envious of Maggie the anchors are. Peep the smiles and awe and lack of shaming here. Look how no assumptions are made about her character or sexual behavior based on her choice to become a stripper. Observe how her work as a stripper is treated as a stellar work opportunity, a show of initiative by an industrious young woman, rather than as a low point or last resort, something she did when shit got really real because, well, obviously she has no other skills. Nary an ounce of judgment in this story.

Oprah would interview her.

How often do you see a brown woman who uses her body to change her circumstances in this way, wholly of her own volition, spoken of in a positive way? Consider how Nene's history as a stripper is a scandal and a punchline, yet Kim K's lazy backshot extravaganza is a business model.

Frankly, it is thanks to her whiteness that she is not a villain or a lowly and unsavory woman fulfilling a handful of racial stereotypes. Here, she is a hero, to be admired for her gumption, foresight, and bravery. She'll tell this story after parlaying her nighttime activities into a book deal in a few years and will receive chuckles rather than pity.