Lemon and Ice: The Rules of Blackpeoplegatherings 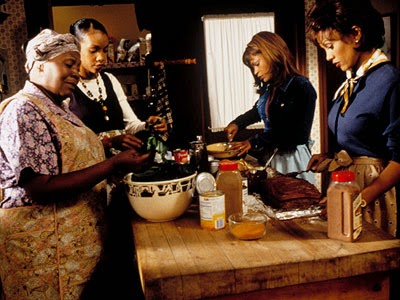 As a full-time Black person, I have attended about 12 hundred dozen Blackpeoplegatherings in my lifetime. Crab boils. Welcome Home From The Clink parties. Fish fry-style wedding receptions. You’ll probably observe many of the same elements at most of these Blackpeoplegatherings. Drank. Music (with a high probability of the Electric Slide making an appearance). Bad ass kids. Overindulgence and the Itis. Well seasoned food. The usual.

(Do White people get The Itis? Serious question.)

In these Blackpeoplegatherings, there is an unspoken hierarchy of meal-making clearance that exists to ensure collective enjoyment and prevent mass food poisoning. More importantly, where dish responsibility is concerned, this hierarchy helps avoid culinary blunders and embarrassment. Meats > Macaroni and Cheese > Greens> Other Sides > Dessert, etc.

In short: unless you want to be the person who fucks up Granny PumPum’s 113th Great Day In The Morning Super Turnt Episcopalian Celebration of Life dinner with a dry ass turkey, know your motherfucking role in the kitchen.

Every relative isn’t allowed to up and decide that they’ll make the primary meat of the meal. Twenty-nine-year-old Auntie Bop Bop, who survives off of corn chips and purple Kool-Aid would never be allowed to walk through the door with a turkey on Easter Sunday. Uncle Man-Man can’t declare that he’ll make The Fried Chicken on Christmas night if nobody has ever tasted his cooking. There are rules. You have to audition and shit. Anything else would be uncivilized, and would only take place in a family where crack rocks mean “I love you.”

At these Blackpeoplegatherings, food is often the purpose of the event. Sure, it’s nice to catch up with your favorite Druncle and his new dumpy White girlfriend. But over here in reality, getting down on that corner piece of the macaroni and cheese is the real reason for the season. So if you do Harlem Shake your ass out of bounds where food is concerned, you will never ever ever ever live it down. Your Black family will NEVER let you forget that one time you forgot to rinse the college greens before attempting Meemaw’s recipe. Until the day you perish like Nicole Scher$;ra!J678’s singing career, you are the LaTivia LaTavia of holiday meals. You can only bring liquor and napkins, ya bish.

Pro tip: If you’ve never made a certain dish before, holidays are not the best time to experiment.

About a decade ago, my family met up for Thanksgiving at my grandma’s house. Now, my grandma is the kind of woman who doesn’t eat in restaurants. She rarely eats other people’s cooking, and if she does, she never forgets a culinary blunder. (“She’s nice, but she likes to use a lot of salt. It was alright, I guess.”) Miss Ruby doesn't believe in buying cleaning products or salad dressing because she can make her own. Duh. She is a legendary cook and used to cater damn near every Panamanian or Caribbean event in the 757. If she is involved, the meal-making clearance hierarchy is as follows: She makes everything, including the sorrel. Anyone else can bring dessert but it must be prepared outside of her kitchen. And you can do dishes, if she’s convinced that you know how to wash dishes.

There is no “I’ll bring the ham” because No. You will bring the Paul Mason and take the trash out. In this case: “you” means “the entire family.” No exceptions.

So on this particular Thanksgiving, my sister and aunt decided to bake a cake after dinner. A lemon joint. Somehow, they were able to prepare it in Grandma’s kitchen, unmurdered. My uncle was sent to the store for icing. Lemon icing. “Okay fine,” he said as he grabbed his keys and bounced.

We continued Blackiando and talking shit. I likely went back for a third plate. My uncle eventually returned with two bags and set them down on the counter. The cake had cooled and we were ready to apply the frosting and get to work.

He presented his purchase to his wife, satisfied with himself for his contribution. “Here, lemons and ice.”

You know that instant where the air is sucked out of a room, all eyes meet, and everyone explodes into laughter? Yeah. We howled and cried for a good 20 minutes, mainly because my uncle didn’t find it funny at all and, well, Black relatives ain’t shit.

“Now, tell me what you thought we were going to do with these lemons and this ice,” my sister asked, placing her hand on his shoulder. Everyone paused to wait for his response, because Black relatives ain’t shit.

“I thought y’all were gonna make icing with the lemons.” More tears.

Now, that wasn’t even a meal-ruining blunder, but do you think we’ve let him forget that he brought lemons and ice rather than lemon icing? Of course not. A decade later, my Dad or someone will ask him, “So, what’d you bring?” and the tears just come.

We’ll probably put “lemons and ice” on his headstone.

So, friends, as summer unfurls and the chicken-eating gatherings approach, remember: know your motherfucking role in the kitchen. Stick to the rivers and the lakes that you’re used to. Don’t be the guy that ruins Granny PumPum’s 113th super turnt birthday. Every auntie can’t be Deena Jones with that crockpot. And that’s okay. For dignity’s sake, sometimes it’s better to stay in your place, be the LaTavia, and bring the fucking ice cream.