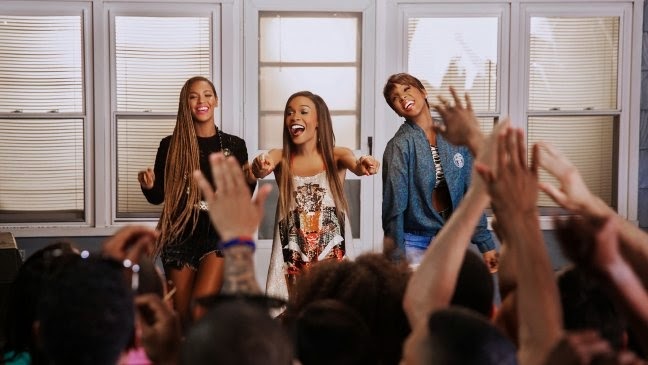 I enjoy Michelle Williams. After advancing through the elimination rounds, she proved herself to be a solid third member of Destiny's Child and even had a few shining moments during the Destiny Fulfilled era. Back in 2008, I was momentarily obsessed with "'Till the End of The World," a song from Unexpected, her first solo venture into pop and dance music.

In the years since Destiny's Child went on the largest lunch break ever, she has been able to forge her own lane and keep a nice, tasteful condo on Mount Relevance. Of all the DC alumnae not named Beyoncé, Michelle is easily the most adept at using her skills to pay the automobills and keep the lights on. She found success on Broadway with Aida, a national tour of The Color Purple, and Fela!,. She has dropped three albums, making a name for herself in the gospel world. And: hella television appearances. In short, she's no LaTivia LaTavia Whatchamacallit. She will find a check.

Here are my thoughts.

1. Michelle is in the driver's seat and I like it. So you know what that means? All the best shots and high notes? Yup. Michelle’s. Kelly? To the bridge! No, but seriously. Michelle did her thing here. You go, Glen Coco. Seeing this video led me to go see what else she's been up to. Her duet with Fantasia on the remix of "If We Had Your Eyes" is pretty damn good. Then I saw this interview where she's real as fuck about the challenges she's faced. And her tumbles. Ahem. Likable as all hell.

2. I love hearing and seeing these three together. A new album would be great, but leaving fans with memories of the good ol' days is also just fine.

3. The song has grown on me. A lot. When I first heard it, I initially thought, "Oh, this is 'End of Time' with a bible." But I get it now. The visual brought it home for me. Well done. Props to director Matthew Cherry.

4. I'm not mad at Beyonce's Afrocentric Worldly Deaconess swag in the clip. That white holiness cloak? That gold neckpiece? Those Liturgical Hands of Reverence? They all work well with those Vacation Braids. Get it.

5. Kelly Rowland, unlike my tolerance of dairy, is getting better with age. She is finer each time I see her. Though I adore her any way she decides to leave the house, I love this short haircut as it lets. me. appreciate. that. face. even. more. Motherhood is going to look so good on her.

6. This dancer is everything. She was the hypest person on the entire set. She knew every word. Every part was her part. She said to herself, "I will get camera time," and proceeded to eat that choreography right on up. May the demons of arthritis never beseech her knees or prevent her from dropping it low and releasing these blessings upon the world.