Orange Is The New Black's Piper Chapman is a herpes sore on my soul. There are no major plot spoilers here. Unclench those cheeks, bro.

This past weekend, I eschewed sobriety and responsible personhood and spent two days drinking sangria, [none of your business]ing, and binge watching the newly released second season of Orange Is The New Black. I did exactly none of the many things I promised to do by Sunday night. I apologize for nothing.

OITNB follows a bisexual upper-middle class woman through her 15-month sentence for a drug trafficking crime committed a decade prior at the coercion of her slimy ex-girlfriend. Yes, she is White. (This is important. Obviously.) Like with Netflix’s other original series House of Cards, I was emotionally invested from season one, episode one. This time, I refused to fall victim to the inconsideration of plot-revealing fuckboys on Facebook. So, powering through the whole shit at once was the only logical option. Take that, troglodytes.

I love this show.

The writing is sharp and realistic. I laugh hearty laughs while watching. I cringe, smile, and judge while watching. Each of the inmates feels real. I know Black girls who cuss, gesture, laugh, and crack jokes like the ones on the show. I see bits of people I know in Poussey, Dayanara, and Crazy Eyes. The ensemble cast of inmates is likeable, hilarious and full of quirks, secrets, and quotables.

Season two breathes even more life into these women, telling a different inmate’s backstory with each episode. Even the Black ones.

Here, the non-White characters have sides. They are dynamic, textured. They are laughing and loving people, not merely flattened types whose existences begin and end with their interactions with the lead (typically White) character. This ain’t a gang of Harrisons fast-talking in the poorly lit corners of Olivia Pope’s shit show of a life. I appreciate their richness.

That I am surprised by humane, believable depictions of non-White people in 2014 is unfortunate. 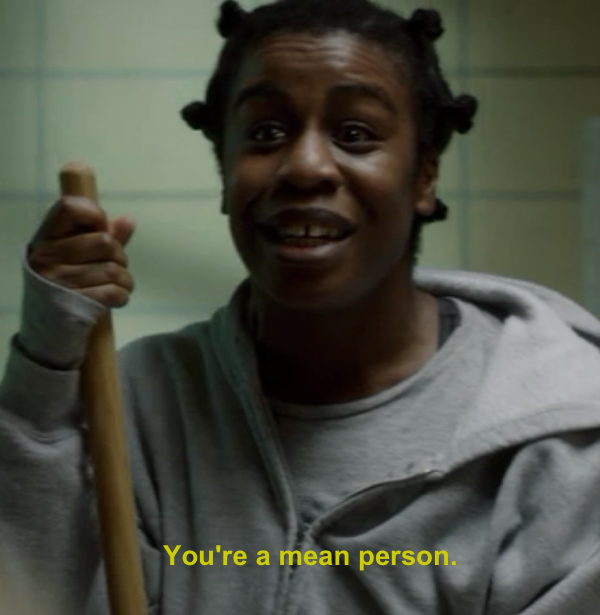 Despite all of the show’s victories, there is one element that agitates my inner ever-angry, cane-swinging old Black man: the show’s main character, Piper Elizabeth Motherfucking Chapman, full-time Horrible White Woman Extraordinaire.

How can I begin to explain a character whose entrance into the frame incites urges to trip toddlers and decapitate teddy bears?

Basically, Piper Chapman is White privilege in a jumpsuit. She is an amalgamation— a seasoning-free gumbo, if you will—of all the most soul-stabbing, aggressively terrible qualities found in all of history’s most insufferable White characters.

Piper is more dastardly than AHS: Coven’s Delphine LaLaurie, a wealthy immortal New Orleans socialite and murderer who whiled her days away inventing new ways to torture the captive mutilated Negroes in her attic to feed her ghastly perversions.

She is more distressing than the smiling, relentless welfare lady who lived to harass and dehumanize Diahann Carroll and her six kids in Claudine.

She is more insufferable than 1001 identical and forgettable Jennifer Aniston romantic comedy roles.

You get my point.

The show, under all the diverse casting and greatly appreciated humanity, is the tale of a troubled White woman—whose current predicament is an isolated incident, not a cultural norm—being dropkicked off of Mount Privilege and forcefully integrated to the dark, cruel darkie-filled world beyond her comfy waspy bubble of cashmere sweaters, cucumber sandwiches and artisanal soaps. She is learning, in 13 tightly packed episodes, what marginalization feels like.

We are watching a White woman meet injustice for the first time. Woe is she.

AUDIENCE
(in unison)
Awwwwwwwwwwwwwwwwwwww.
This season, the extent of Piper’s awfulness is explored in great detail. Magnified. Projected. Once we begin to learn the histories behind the other inmates, it becomes clear that Piper’s is the least compelling storyline. Her onscreen time is spent being terrible, being reminded of her terribleness, and halfheartedly apologizing for said terribleness.

Most of her peers have little to look forward to once released. Many have no support beyond prison walls. Despite this, Piper’s woes (both real and imagined) are to remain paramount. She plays Captain This-Is-An-Outrage when convenient. While adjusting to air beyond her waspy bubble, she scoffs, belittles, and rages at each of life’s tiniest injustices. She is as surprised to regularly hear “No” in season two as she is upon arrival to prison last season.

As the characters around her experience and open up about personal tragedies, Piper Elizabeth Motherfucking Chapman, not to be out-pitied, flexes her mastery of the art of narcissism. Every time. When given options, she takes the one that guarantees the best outcome for Piper, consequences be damned. Every time. She is self-centered and feels things happen to, rather than because of, her. Nothing is her fault, ever. Big Boo tells her directly in episode four: “You really are a terrible person.” That is the entire series in a nutshell.

She is a scoundrel and a herpes sore on my soul.

We see major growth in several characters over the course of the season. Friendships are fractured and rebuilt. Alliances shift. You know, there are a lot of human moments. Through every instance of loss or learning, the common thread in each episode is unchanged: Piper is the worst White woman ever on television.

It’s impossible to feel sympathy for her amidst the personal dramas she faces because she is wholly unlikeable. She has no redeeming qualities.

As show creator Jenji Kohan shared with NPR, no network would order a show about zany minority inmates. When Mother Maya said, “You alone are enough,” that clearly excluded Black and brown faces on television and movie screen. In short: White is right. Piper Chapman is a necessary evil:

"In a lot of ways Piper was my Trojan Horse. You're not going to go into a network and sell a show on really fascinating tales of black women, and Latina women, and old women and criminals. But if you take this white girl, this sort of fish out of water, and you follow her in, you can then expand your world and tell all of those other stories. But it's a hard sell to just go in and try to sell those stories initially. The girl next door, the cool blonde, is a very easy access point, and it's relatable for a lot of audiences and a lot of networks looking for a certain demographic. It's useful."

I can’t recall any other character—White, left-handed, or otherwise—that evoked such a visceral response from me. Apparently Stringer Bell from The Wire was pretty despicable, but I never followed that show. Scorn for Breaking Bad's polarizing Skylar White, manifested itself via awkward real world encounters for series star Anna Gunn. I’m not alone in my disdain for Piper. Several people I mentioned Piper Elizabeth Motherfucking Chapman to over the weekend also spoke of deep, almost tangible hatred for the protagonist. There are others. A few even stopped watching the show last season because they couldn’t stand Piper.

Jenji Kohan clearly gets the importance of visibility. Fortunately, the show and these non-White inmates are riding into homes and streaming devices on the back of Piper's inherent safety, accessibility, and quirky White coolness. You take the good, you take the bad. I suppose Kohan was right: Piper is useful for something.

Using Piper as a means to shed light on often overlooked societal issues may have been a smart move, creatively. It's always easier to face uncomfortable moments through laughter in digestible chunks, aided by smart casting and punchy writing. But good intentions do little to offset all of the bad things viewers wish for Piper Elizabeth Motherfucking Chapman.

If Kohan's goal was to create a two-legged plague, she's been damn successful at doing exactly that.

Here are my suggestions for future storylines:

A) Piper murders a fellow inmate and is swiftly executed. My heart goes on. Taystee becomes the lead.

B) Piper is somehow released from prison and moves to the mythical land known as Delaware.
C) Piper is sent to solitary confinement and is simply never heard from again, just like Judy Winslow. She never happened. What never happened? Exactly.
D) Season three opens with a peak at an alternate reality where Piper Chapman is a Black ass sharecropper in Jim Crow-era Mississippi. There is no Starbucks. There is no cashmere. She has hypertension, a lazy eye and fiery herpes and there is no Obamacare to save the day. Hilarity ensues.