a few words on the Michael Sam "situation" 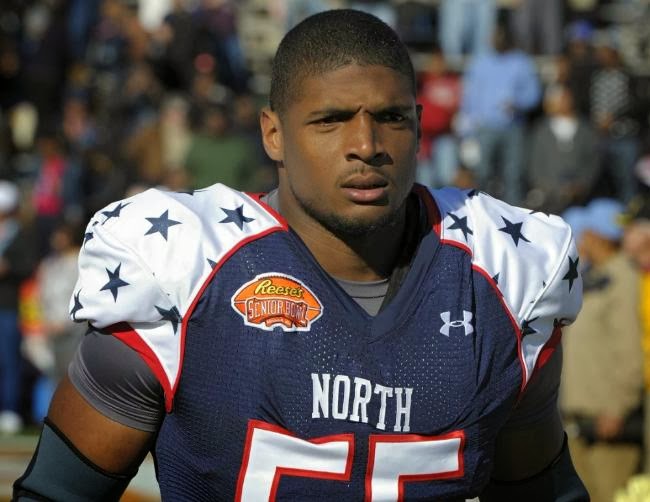 This past weekend, All-American athlete Michael Sam came out publicly. This matters because, if drafted, he'll be the first openly gay NFL player. I was asked for my opinion on the matter. I'll keep it brief.

one.
Already, predictably, NFL players, coaches, and others who profit from football have had mics extended in their direction by dutiful reporters inquiring, hypothetically, how they would feel about a gay teammate. Would this affect you in the locker room? What if he LOOKS at you (knowing those same eyes look at naked men's bodies)? Would you panic (if perhaps you were caught in an elevator with this gay motherfucker)? Could you shake his hand just the same (knowing the gay things he does with that hand)? Would you respect him (although he's hell-bound)? Would he disrupt the camaraderie (amongst the other, morally pristine teammates)? Wouldn't you be afraid that he'd think about having gay sex with you (because, gay)?

All that is expected at this point.

MY question is: Would it be acceptable to question these professionals, hypothetically, if working with rapists, child neglecters, dropouts, alcoholics, abusers, addicts, heartbreakers, men with underbites, convicts, liars, men unable to keep their dicks in their pants and men who collect children like sneakers affects their ability to perform the job which they are handsomely paid to do? Because there are tons of those in the NFL and NBA. They are easily identifiable, actual proven (and occasionally convicted) men of poor character that can be discussed with certainty rather than hypotheticals. If Pam Oliver pulled a young man aside and asked, "JaQuavion McBurgerKing Braxton has 6 kids by 9 women. If he is traded to your team, would that dampen the morale among the guys?" or "Does bringing your wife and kids around your teammate that beats the entire fuck out of his significant others also make you nervous?" or "What if people associate you with a tax-evading dirtbag? What will your pastor say!?" would those also be acceptable questions?

All of that is okay and "part of the lifestyle," yet a man brave enough to live openly is unacceptable and a threat to team morale? Gotcha.

two.
We spend too much time babysitting the emotions, preferences, and fancies of proud bigots. Society pacifies those who stand firmly in their prejudice far too often. We pad our questions and try dearly not to offend them. We grant them attention and audience, validating their views. In general, we defer too frequently to the whims and dangerously misinformed opinions of men who don't seem to accept reality, like the fact that there have always been gay people in sports. Just like in the real world. Oh, you mean athletes behave (and fuck up and fall at varying points on the spectrum of sexuality) just like us mortals? You mean they are people, too? Clearly.

three.
We tap dance around obvious deficiencies of reason in order to keep the peace. Ex-coach Herm Edwards feels that a gay player in the locker room is unnecessary baggage. Oh, you mean like a murder charge? Or maybe like the over 395 arrests of NFL players (by now, over 425 for sure) over the last 7 years? Those things are normal and public and affect the team's roster and image as well as the NFL as a brand, yet are ultimately explainable. But he's a good kid, they'll say. But a gay dude at the locker next to yours? That is where you draw the line. Never mind that those questioned on this hypothetical matter so far apparently regard the players as little more than juvenile and unable to field "tough" questions.


"Can the players handle the media attention they are going to get, when they get the question asked, 'are you okay with a gay teammate?'"

Because of course, it's about them, and their struggle. The poor things.

As the football field is unlike any other environment with humans in it, there have obviously been gay players embraced and protected by their teammates. It remains to be seen if an openly gay teammate will render these upstanding gentleman unable to do their jobs. Until Sam is drafted, though, we'll surely see no shortage of conjectures about how his private life will affect the delicate balance of machismo or threaten the manhood of all who encounter him. It's 2014. If we can allow a post-menopausal performance artist to masquerade as a 17-year-old named Lorde without the sky falling, if teams of formerly left behind children can be plucked from poverty and rescued from the land of Life Failure to become household names while double dutching in and out of court, brazenly harlem shaking beyond the Line of Basic Human Decency, surely a Defensive Lineman of the Year who is at least forthcoming about his off-the-field activities won't stop the champagne, bankruptcies and paternity suits from flowing. In short: worry about yourself.