This Week in Whiteness, Volume 01

If you're reading this, then you, like I, have made it through another week without being lynched or suffocated by rage or eaten alive by the palpable terribleness of Busta Rhymes and Plaza Azteca Banks' horrid and unsolicited remix of Beyoncé's "Partition". It must be noted that not violently succumbing to such palpapable, gout-like terribleness is quite the accomplishment because its horror is of an Aguileran-level intensity.

They, like Don Lemon to Blackness, have done the song absolutely no favors. I somehow feel as though I'm owed a refund. Or at the very least a store credit.

Three minutes after seeing this painful exchange about a supposed "thug cycle" involving a pampered Black toddler in Omaha, Nebraska between Marc Lamont Hill and Lemon, conservative White America's self-appointed colored mouthpiece, who has never met a Crossburner whose views he didn't try to emulate, I happened upon this picture: 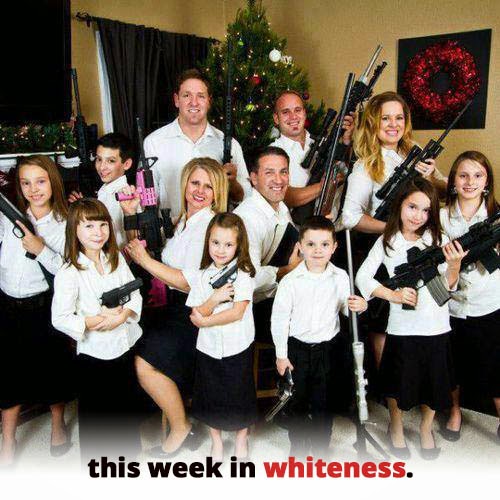 Sure, it's from Christmas-time, but it's been floating around my Facebook feed for a few days. I'm quite tired of seeing this creepy family taunt me with their weaponry and their sinister brandishing of weapons, threatening my peace of mind and my ability to walk past small children without wondering if they're packing heat.

Listen. If this had been a Black family, you can bet the biggest piece of chicken in the box that White media would have a collective heart attack, that O'Reilly and Hasselbeck would be overwhelmed with gratitude to the Gods of Easy Targets and that the internet would swell with thinkpieces on the self-destructive ways of the Black culture as influenced by thug-instructing rap music within the context of our disproportionate social media oversharing caused by our broken homes and lack of positive reinforcement because we don't have Dads. None of us.

But they're not Black. And so this is a nice, charming Christmas greeting with a nice and charming family of mothers and present fathers. And everything is okay.

Pass this to Don Lemon﻿. I'm sure he can spin this as a visualization of the White family's only hope against their perpetual fear of the violent, fatherless, immoral malt liquor-guzzling terror that is the Black family.

With This Week in Whiteness, I just saw fit to spread the wealth a little. One would be hard-pressed to make it through an hour of reality television without being reminded of Ye Black Awfulness. And because carrying the torch of White Terribleness is far too much work (and exercise) for Honey Boo Boo and klan, I figure I should highlight some goodness happening over on the other side of the aisle.

Because I'm a nice fucking person. 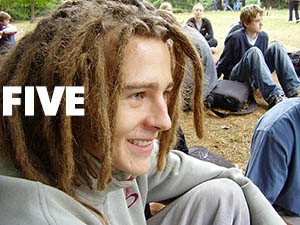 The biggest story of the week, according to the social media nut busts I've seen everywhere is Outkast being announced as Coachella headliner. Full disclosure: if I want to do drugs, sit through a bunch of performances by people I'm not geeked about, and jump around in the sun, I can do it cheaply here in Panamá. Anyhow, this is big for two reasons. 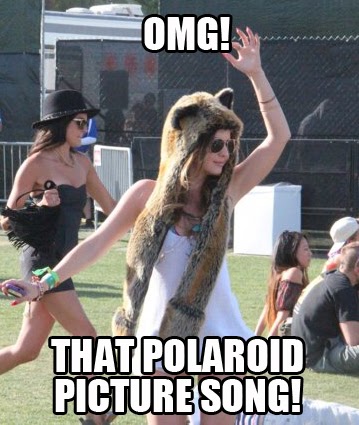 1. It would be the first Outkast performance since before Obama was OBAMA, and,
2. It means we now have an endless supply of people who were still shitting yellow when Outkast was last a thing and are therefore clueless to their wonder.

Enter: Who is Outkast?, a tumblr dedicate to the clueless.

And while some you could argue (like a punk) that all those featured here are not White, we get lumped together with other folks' fuck shit all the time and so, because I'm a nice fucking person, I am giving you credit for this AND I'm doing all the hard work! Just like slaverytimes! Fun!


GO: Who is Outkast? 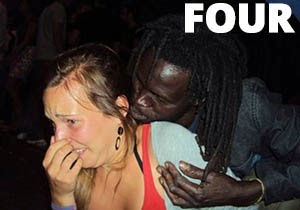 Skill-free White folks, there is hope for you yet in 2014. The skill-free are no longer relegated to being present day Britney Spears, but now...NOW you can take your ass to China and TEACH. And HUMANS, at that. 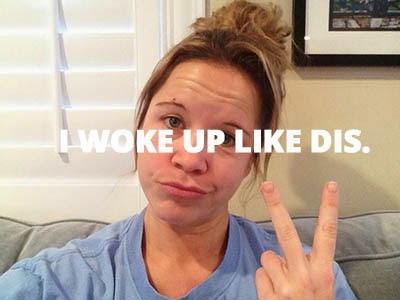 “Want to work at my school?” a lady asked us, thrusting two business cards forward with a smile. “You can start tomorrow.”
We weren’t sure whether to laugh or not. Was she serious? Neither of us knew the first thing about teaching children.
“We don’t speak Chinese,” we told her.
“No problem,” she replied quickly. “So what do you say?”


See that? You're already hired. Start your new life over at VICE. 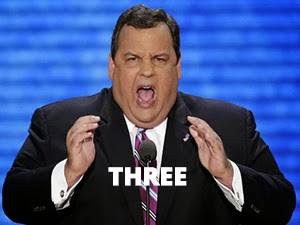 I was going to call this another instance of Cluelessness, but then I remembered the Racial Empathy Gap, and that we don't feel pain, so then this became just another day in America. Awards season is upon us and with that, weeks of wondering which bones will be thrown our way. That, and all the accidental racism that you can fit in a treasure chest of Marlboro Reds.

Not to let us forget the order of things, here is a nifty idea for you and your friends: a '12 Years a Slave' Golden Globes party. YES.

You mean I now have an occasion to try my hand at little licorice nooses, partake in Negro Bed Wench Beer Pong, and play Hide And Go Oppress with my friends?!?!


What the fuck have we been waiting for?!?!

Man, white people think of EVERYTHING. 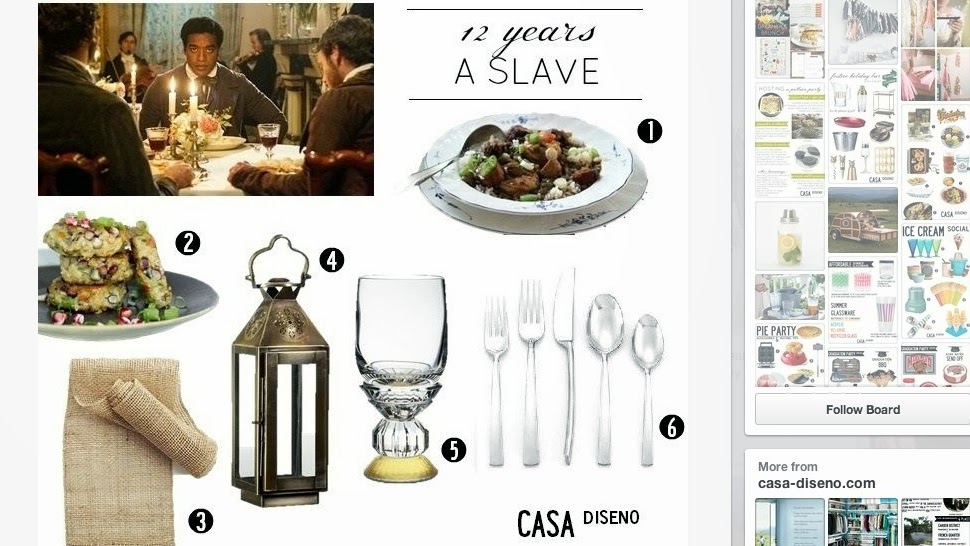 Of course there was plenty of Whitesplainin' and retractin', but ooooh no, you can't deprive me of such delights as Duck, Duck Octaroon and other slave-themed joy. NOPE. Fun is gonna be had. 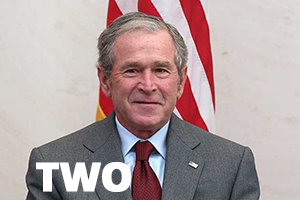 Former Saturday Night Live cast member Amy Poehler, who I normally enjoy, was a bit cranky during a press conference with fellow Oscar host Tina Fey. She was defensive, accusing interviewers of trying to lead her into jokes and set her up for a fall. "I'm not falling for that," she told one.

When questioned on SNL's hiring of a Black female cast member, Poehler, ever the Cedric the Entertainer to Tina Fey's Steve Harvey, spat:

And That as the end of that.

Peep it over at Salon. 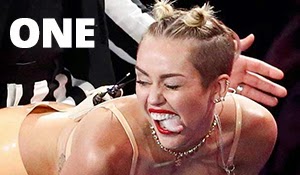 Nothing to add here.

And lastly, to cleanse your palate of all of THAT: 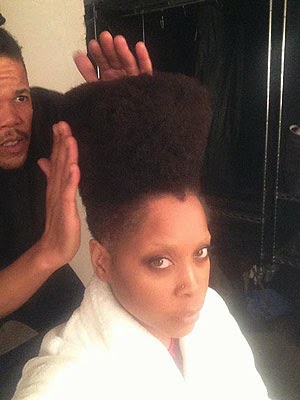 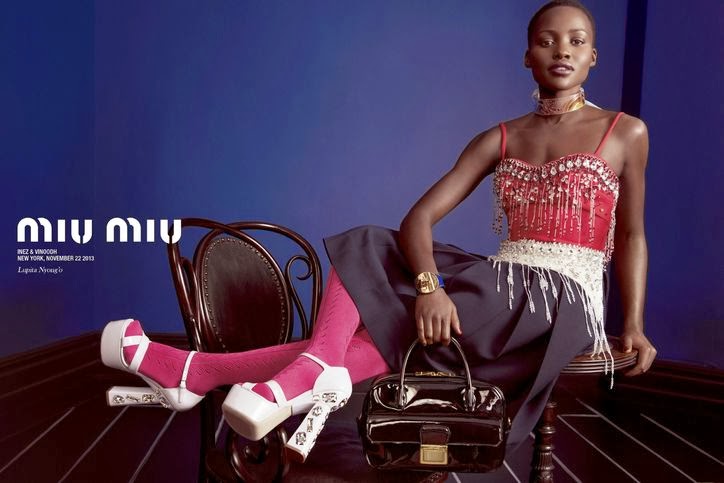