the cake has been eaten: a recap

December 23, 2013
I've officially crossed over to an age where I can no longer describe myself as "closer to thirty than to twenty" with the same curious ambiguity as a few short years ago. I can pass for 25 when people decide to be gracious and/or feel like lying my face is hairless like sex-anticipating coochie. The metabolism that once allowed me to exist off of gummy worms, slurpees, and chinese food is in a locket in a jewelry box in a trunk an attic somewhere in West Whoville. I'm beyond the permissible fuckups of 25, but still a poot away from the mandatory Official Getting Together of Your Shit that is expected when the biological clock strikes 30.

Feels mighty fine in the suburbs of ThirtyLand so far. Dick still works like it should. The Black has yet to crack. The life, it is good.

The past ten days have been quite eventful, to say the least. I celebrated my birthday at my favorite restaurant, home of the best food in Panamá, El Caribe, with great friends. There was food and adult beverages and there was coonery and good times were had by all.
I also celebrated over chicken wings with my African Wife, Bintu.

I also celebrated by going to my preferred place of worship: 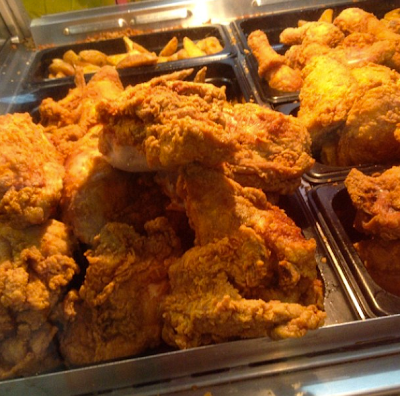 You get the idea. Twas a great moment in time. Wednesday, my first grownup freelance piece was published on EBONY.com. Read it HERE.

Step Four: Tend to the small details.
It’s not quite as easy as packing a six-month supply of grits into a duffle bag and hopping on a plane. How do you get a work visa? Is the US dollar accepted in Shanghai? Can one get kinky twists in Norway? These are all very important issues to address.

Thursday night, while lounging poolside with two friends, I saw tweets about Beyoncé's atomic bomb of an album plummeting out of the sky down to Earth. While listening to it the next morning, I saw THIS:


WAAAAAIT HE JUST SAID "I EAT THE CAKE, ANIME". JAY Z JUST FUCKING USED THE WORD 'ANIME' AS A PUNCHLINE. THIS IS THE BEST SONG I'VE EVER HEARD.

That prompted my response, found HERE:

And then things got interesting. 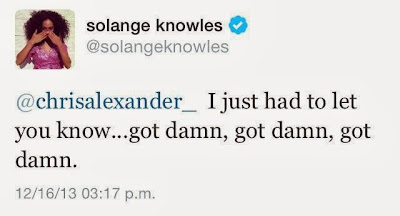 I like to think that She read what I wrote. Maybe. Maybe not.

The unforeseen attention prompted a formal reply from the Great White Raptress, Kitty Pryde, which included this gem:


i asked my manager emeka if he could explain it (he’s a very wise, grown-up black man. i don’t know how old he is because i consider him my dad but also know he’s not that old, but either way he’s old enough to know everything and that’s all i need) and he did so in a way that finally makes perfect sense to me. he said, “black people are used to having to know the first and last names of the cast of friends just to keep their jobs. the fact that you will never have to know about their culture and can easily make a joke about something that holds importance to them is offensive.” and that is actually so fucking true. i feel like a damn fool.

The following day, I was on the TK in the AM radio show explaining this whole ordeal, invited by the lovely Tasty Keish. I come in after the 52-minute mark.

THEN, I was quoted by literary legend Sasha Frere-Jones in an article he wrote for the New Yorker.


The rapper Kitty Pryde delivered a comic “live-blogging” of the album that allowed a writer named Alex Hardy to sort of dismantle her. Read the post, but, in short: a Jay Z line on “Drunk In Love” sounds a bit like “eat the cake, anime,” but is preceded by Jay Z saying the name “Ike,” reminding most of us that the line in question is “eat the cake, Anna Mae,” from the bio-pic about Ike and Tina Turner. I won’t pretend to know how this potentially ugly reference works between Jay Z and Beyoncé, but it’s her album and they look pretty happy on the beach, so some sort of inversion is at work.


When Alex Hardy sets Kitty Pryde to rights about the lyrics “eat the cake Anna Mae” in “Drunk in Love,” it’s a reminder of how flippant people have been with black entertainment.


and referenced in a list of writers who've commented on the Beyoncé album on NPR's music blog, The Record. To even be mentioned alongside such beasts as dream hampton and Jody Rosen is incredibly encouraging. Read that HERE.

I've been called a race-bating hatemonger, a dirty spook, a tap-dancing porchmonkey, and a tiny-dicked watermelon-juggling, corn on the cob-sucking African booty scratcher.

Okay, not really. But judging by the lively comments, I KNOW a handful of the readers toyed with the idea of saying such things. It was refreshing, though, to see the Whiterage and emotion policing kept in check by other Blacks Who Are Sick Of the Dumb Shit and my favorite kind of uncolored people, Whites Who Get It, without my having to step in and regulate.

One foreseen result was the appearance of those who are masters on feelings, race, and culture, who've deemed themselves worthy of determining what is and is not:
a. racist,
b. offensive, or
c. appropriation.

I suppose as the primary perpetrators of these things, they would of course be the experts. A common comment I've seen in response to this piece is that by continuing to talk about this thing, this life-ruining and judgment-clouding affliction called racism, I am encouraging it.

Firstly, I don't consider Kitty Pryde a racist. Nothing she did was racist. Ignorant, yes, but racist? Hardly. But consider that for a second:

Me. A black person. Encouraging racism. Imagine that.

What these geniuses fail to grasp is that it's not my responsibility to control, soothe, minimize, reduce, and attempt to eradicate racism. I didn't create it. Now Negroidian hypertension and Chicken overindulgence are things I can tackle, IF the latter were in fact something to be concerned about. But Racism is not my sickness to deal with. I've coexisted in a racist world for 29 Black Ass Years and nothing I do will make it vanish. For me, a Coloured, to worry about curbing racism is like me, bepenised, taking steps to stave off yeast infections: McPointless.

I was going to list a host of other clarifications, but I am now uninterested in rehashing the past. Also, more importantly, the loudest shouts came from those convinced that I, or any of my skinfolk:
a. have no reason to be upset (about anything),
b. are fortunate enough to be in this country,
c. should be thankful for being:
-allowed to partake in race mixin',
-granted internet access, and
-allowed to hold jobs.

SO, gracious Whitefolk, I thank you. Who knows what kind of weakminded nigra I'd be without the countless soul-strengthening  micro-aggressions encountered daily.