I figured that learning perfect Spanish in a classroom in Los Angeles, a textbook Spanish that I would encounter exactly nowhere on this earth, was not the way to master the language. So, armed with a four-point plan of action, a heap of determination, and a bottle of lube, I copped that one-way ticket to freedom and took to the sky.

Being half Panamanian, I'd heard stories about life down here. I had seen pictures of my happy, well-dressed beautiful Black relatives from their days in the Canal Zone, seen molas and polleras. I had eaten enough empanadas and arroz con pollo to fill Yankees Stadium, but had no firsthand experience to form my own opinion. Every. Single. One of my cousins had either grown up in or visited Panama repeatedly, and I figured it was my damn turn.

Going off of what my grandmother prepared me for, I spent my first week on the lookout for gangs that laid strips of nails in the street to hijack or rob buses at intersections. Thankfully, I managed to avoid getting raped and lynched and skinned and re-raped for my precious American passport. Whew.

What I actually faced was nothing like anything I had conjured up. Lush and overdeveloped and imperfect and shiny on the exterior, Panama City welcomed me openly. It represented endless opportunity for growth and exploration. So I soaked up everything, ate everything, humped everyone, and tried everything. I learned 100 things a day, developing linguistically and socially, and finding my way. However, I had no one to tell me the real deal before landing, especially as a Black man. My mother and grandmother's experiences, which ended when they packed up and moved to America in the 1970s, could never have prepared me for what to expect in Panamaland.

Because one can easily find glossy, friendly, whitewashed explanations of life here (in which mostly brown areas are labeled as RED ZONES OMG DON'T GO THERE OR YOU'LL SURELY GET KILLED IN THE FACE) in travel guides and on expat websites, I feel personally responsible for sharing my Black ass perspective with other Black ass people considering visiting or relocating here. And so, I shall offer you a few (of 100 million) things I've learned from living in Panamaland. We’ll go through this in nice, digestible chunks, yes? And while there are countless beautiful things about livng in Panama, I figured I would start with the shit you're least likely to be told elsewhere and work our way on up to the rosy stuff. Okay.

1. White is right.
If I had no Afropanamanian relatives or had no knowledge of the surprising cultural diversity of the region, and had just left the airport and rode through the city in a taxi, looking solely at billboards and advertisements, I would think that this was a country of model-like, beautiful white people who lived in pristine white deluxe white apartments in the white sky, driving white luxury cars, with perfect whiteriffically white teeth with which to smile at their blond-haired perfectly white children while being whitingly white in the (white) hood.

I understand the concept of projecting aspirational images in marketing. Since images of prosperous white people are in no short supply, that tells you a great deal about how things work here in the isthmus. Know that the smiling faces on billboards look so unlike the bulk of the people you’ll encounter daily. Not in the grocery stores or malls. Not on the news. This, of course, speaks to the Panamanian love of all things White. For this, you can thank the wildly successful White Is Right campaigns enacted relentlessly worldwide by your favorite culture-crushing melanin-free superpowers of yesteryear. You, Black person, shouldn’t expect to see many positive images of yourself in the media. Though there are in fact Black CEOs, attorneys, and people of note, they are not nearly as visible. You can, naturally, expect to see an abundance of images of yourself: 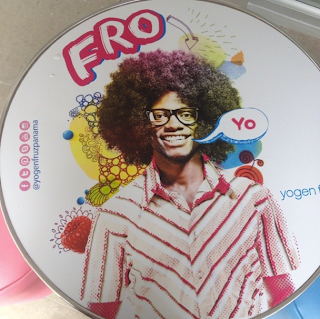 Don’t feel too bad. There is indeed a tiny upside to being scarcely represented. I’ll get to that shortly. Thanks to that aforementioned White is Right campaign, you will notice the existence of white supremacy’s understated yet pervasive stepchild, which we get to next.

2. Colorism is everywhere.
Thanks to colonialism, capitalism, missionaries, slavery, and a fascination with all things American, my culture shock upon arrival to Panama in July 2011 wasn't too jarring. Who knew that Six Degrees of Darkness was as popular a game down here in the Platano Belt as it was back home? Here, instead of brown folks reveling in their proximity to Whiteness (or, distance from Classic, Regular old Black) with greatest hits like high yellow, redbone, and octaroon, bekinked chicos y chicas compare their skin with such fun everyday items as cinnamon, café con leche (coffee with milk), cookies (which certainly doesn't mean Oreo), sand, and my personal favorite, khaki. Yes, khaki. As in, “Yo no soy NEGRO negro. Soy más como…khaki.” Whatever. A close friend of mine has even been corrected when referring to herself as a Black woman, being told that she was instead the more preferential, safer, cleaner Morena (brown woman). It's quite the complex issue--explored in depth here--but certainly provides for colorful daily interactions.

BONUS ROUND:
Unless you decide to brave the lawless junkie derby that is also known as Driving in Panama, you will develop your own special love for taxi drivers. I’ve done the hard work for you, compiling this wonderful resource to help you in your endeavors:*

Hierarchy of preferred customers for taxi drivers in Panama:

This hierarchy is altered under three circumstances:
Now. Take a deep breath and govern your rage accordingly.

*= to be printed, laminated, stored in your wallet and referred to in times of distress

Alright. I’ve got 700 things I could share, but that’s enough for today’s episode of Black in Panama: On Being Someone’s First Black Screw How to Be Chocolatey and Wonderful and Blackety Black Black in Panama. Stop by again soon for a few more more survival tips.

Now go forth and be somebody's chocolate fetish. More on that later.

Continue on to Part Two.