The Bronx of TV Moms: On Harriette Winslow 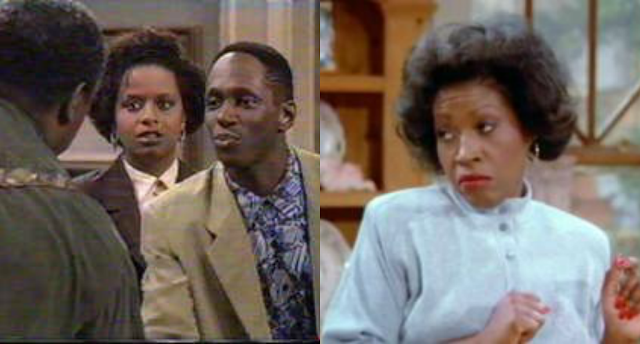 Harriette Winslow, the Bronx of TV Moms, is who Vanessa Huxtable would have become had she married Dabnis Brickey. Cliff knew better.

Among all the important brown TV moms, Mrs. Winslow, Carl's beloved Bag of Surly Side-Eyes and Screwfaces, was always my least favorite. She never really did anything besides nag, and she never hid her absolute disdain for forgotten child, Judy Winslow, whom she left upstairs alone to eat carpet lint and pencil shavings season after season after season, and I presume was the product of an affair between Carl and either Aunt Rachel or the saleswoman at Montgomery Ward who sold her that lifetime supply of red lipstick. Her entire existence can be characterized as her being in a constant state of disbelief about some ABSOLUTE BOOLSHEET that someone was attempting to present her with. Her acting motivation: "...................you do know that I know that [your life/whatever you're telling me] is a basket of Hell No, right?"

Most of my memories of her were of her scolding someone, and of her face twisted up in a mean ol hateful scowl, angry at Whomever about whatever. Mrs. Winslow always struck me as rough around the edges, the type to ride the school bus with you in the morning to jump kids who bullied her children and attack overly critical teachers with tennis rackets and brass knuckles and bricks on ropes. The type to climb in the windows of boys who hurt favored offspring Laura Winslow and inject Krokodil into their eyes as they sleep. And to punish her children by starving them and/or leaving them upstairs unattended season after season to eat carpet lint and pencil shavings. And so on.

Sure Family Matters was intended to be her show, but in all seriousness, how far can you really stretch a story arc built around a scowling, snappy Black woman with a neglected child? Shit happens. Enter: Steve Urkel.

Anyhow, in the grand scheme of things, I rank her as follows:

I was so generally unmoved by her that until this very moment, I completely forgot her replacement in the final season with the somehow even more forgettable Judyann Elder, who always struck me as a woman either going through The Change or in the beginning stages of dementia. One of the two for sure.