For the uninformed, after he roamed free for 44 days before his arrest, after his supporters raised hundreds of thousands of dollars for him, after a circus of fuckery and delays and a massive weight gain, and after an all-female mostly white jury was assembled, George Zimmerman's trial for the murder of Trayvon Martin has now begun. Google it.

I won't dive into any specifics other than the prosecution's so-called "star witness," the polarizing Dominican-Hatian Miami resident Rachel Jeantel, the last person to speak to Trayvon Martin.

There's a lot being said about this girl. Type her name into any search engine and you'll see a cornucopia of colorful descriptors used for her. There are debates over who failed her more: her parents or Florida schools. Some of you think Trayvon should have chosen smarter, more well-spoken friends who could have expressed themselves better in the event of his death. Some even question her citizenship status (hello, fellow post-racial Americans). The world was apparently unprepared for a "sassy" Black 19-year old going up against a desperate white attorney and his treasure chest of fuckshit antics.

I, however, would describe Rachel Jeantel as "dignifiedly indignant." She didn't say, "White Motherfucker, I hate you." But the defense attorney undoubtedly knew. He felt her niggertastic hate wash all over his pale skin in every hateful narrowing of her eyes, every hate-filled eye roll, every hate-soaked deep sigh, and every hatefully dismissive "Yes. Sir." hissed through clenched teeth.

She let her disdain and frustration be clear without being overtly disrespectful, even when the defense asked her the same question 12 different ways in an attempt to a)trip her up in a lie and b)discredit her as a witness. Unfortunately for them, as ignorant, uneducated, worthless, and sad as you all painted her, she stood her ground. Visibly annoyed, admittedly frustrated, and humorously moody.

Even still, she knew her facts and didn't let his desperate antics knock her off her base. As wise and superior as defense attorney Don West is supposed to be, he was unable to outwit her. Fail. 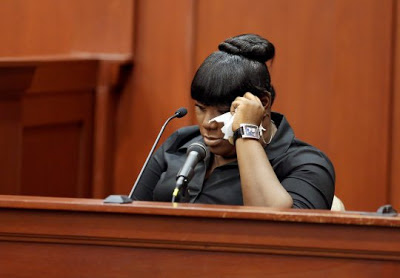 As for how she's being treated in the media: Were you a model citizen at 19? If your life was cracked open and shown to the world, would you have anything you're not proud of on display? If you're anything like me, you may have been at most a shiny piece of shit. My parents may have thought me an angel, but I was certainly whore-adjacent and less than exemplary. Do our piece of shit pasts define who we are absolutely? Let's just say I hope no legal team or eager bloggers ever go digging through the skeletons in my closet. Same for most, I'd say. Ahem.

To see people with 4 babies by 9 men who can barely master their native tongue bash a girl who in fact speaks three languages and didn't ask for ANY of this attention...is pretty saddening. Imagine being normal today and having your tweets and personal photos discussed and analyzed by CNN anchors tomorrow for simply being the last person to speak to a murder victim. Could she control that?

Try having the quality of your upbringing brought into question.

Having your Facebook friends contacted for insight on you as a person.

Having reporters text you for quotes about your dead childhood friend.

...which brings me to what I consider the most important factor here: She didn't ask for any of this scrutiny. Sure she's not as "eloquent" or well-spoken as you THINK you'd be if on the witness stand in a murder trial in front of cameras with millions of people watching and talking about you with a murderer and your dead friend's parents feet away from you, but she did her best.

You try sitting there with a condescending old fuck attempting to destroy your character, critique and question the value of your culture, and suggest you don't understand English RIGHT TO YOUR FACE and see how composed you are. Would you not be irritated? You've never stuttered in a job interview? Never been flustered speaking to police? You can't possibly know how you'd perform under similar circumstances knowing what's at stake.

Aaaaand I need not remind some of you ridiculing her appearance of your...facial...and dental...and physical...situations. Ain't I gracious? This trial is bringing out the worst in many of you, especially given the amount of struggle in "you're" daily communications.