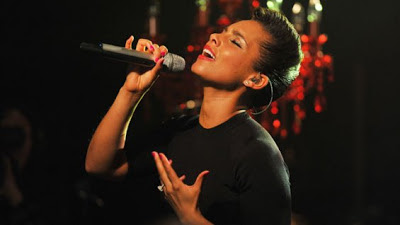 It could be argued that she exists as punishment for mankind's sins. Our penance for allowing Lil Wayne to continue to be a thing in 2013, if you will. A living, breathing, breeding, infected, seed-planting thing in this age of accessible euthanasia, anti-plague initiatives, and a generally accepted taboo against beastiality. Yet he exists and persists.

Why the renewed concern?

I'm tired of people tiptoeing around the situation at hand.

Sure, I can tolerate her stealing Eve's Pitbull-In-A-Skirt act and running with it. I'll deal with that.

But that pang in my chest that means YIELD, YIELD, YIELD BITCH BECAUSE SOMETHING DREADFUL THIS WAY COMES anytime I see her disconnect the mic from the stand and sashay away from the piano?

I WON'T GO FOR THAT.

And let's stop pretending that her brand of performance consists of anything other than her sprinting toward and doing a twisting triple back handspring/macarena/mid-air Harlem Shake through a flaming hoop over that line in the sand that separates the top of her vocal range from a monsoon of banshee-like screams and wails, signaling the beginning of my testicular pain. Stop that shit right now.

Once upon a time, I enjoyed Alicia Keys' creative offerings. I didn't always have menstrual cramps at the mere sound of her voice.

Let's get this out of the way: (When not dancing) she (usually) looks great   these days (except when opening her mouth to do that thing where sounds come out that certainly cannot be known as "singing.")


For me, her sweet spot was somewhere after her introduction as the complexionally-preferred, husky-voiced, (possibly) dick-slangin', piano-playin' alternative to She Who The Industry Destiny's Childed and Rejected, India.Arie, and everything that came after the blindfolded roadside hysterectomy that was her Beyoncé-assisted shout fest, "Put it in a Love Song."

With few exceptions, everything since then has been shit.

Not regular SHIT. But post-"Stripped" Aguilerian SHIT. Unmedicated Britney on tour SHIT. Frank Ocean "I commend your bravery for singing a love song to a man, but Bitch, you got some nerve with this live vocal" SHIT.

And just like even the most vile, murderous murderers and the most molestingest molesters have a mama somewhere rooting for them to pull it together, Mrs. Keys-Beatz, too, has well-wishers who go to war on her behalf and evade this thing called "the obvious" and support the murderous madness.

These people, generally, can be known as "fucking crazy people."

They are not to be trusted within one country mile of your children, should be kept away from your valuables and heavy machinery, and should absolutely be forbidden from preparing important holiday meals.

You know them. They are akin to the "fucking crazy people" who believe that 2013 Britney Spears is still in her prime.

These "fucking crazy people" consider cast members of shows like Love and Herpes: Tuscaloosa and the Real Broke Bitches of Atlanta to be role models and worthy of anything but the finest, shiniest saddles respect. Do not look them in the eye.

You polite and deluded people who come into my Twitter mentions and Facebook comments when I bring her up are unable to convince me that her onstage antics are not an undiscovered symptom for toxic shock syndrome. White Jesus told me this. So give it up.

A wise woman named Janet Damita Jo Jackson once sang, "It's nice to laugh, but don't be the joke."

I hate to break it to you people and that woman, but um....