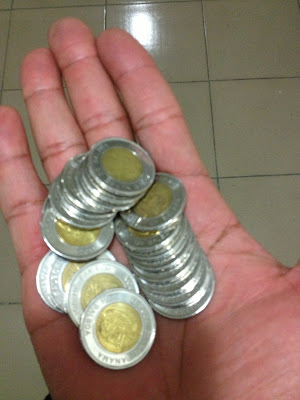 A few weeks ago, at the end of an English class with a young Panamanian girl, her mother emerged from the bedroom and flung her ginormous purse on the plastic-covered dining room table for payment.

"Ya te pago," as she searched…

"Disculpa, un momentito, mi amor…" as she pulled crumpled bill after crumpled bill from her bag, unfolding and smoothing them out with her palm.

After a few minutes, she crept out, awkwardly holding a plastic sack, wincing, apologizing with her eyes before she even began...

"Lo que pasa es que," she began with the most important phrase you can arm yourself with in Panama, "fuí de compras en el Súper99 porque necesitaba un birthday cake, y…" (essentially: What had happened was…I went shopping at the Super99 because I needed a birthday cake…"

She then apologized profusely, including that "I know nobody likes these, but it's all I have right now."

Why the hate over the Balboa coins?

The US Dollar has been the official and only currency of Panama since Colombian (as opposed to Columbian, you goons) currency was wiped out post-Independence in 1904. Though prices are equally quoted in Dollars and Balboas, there are no Panamanian paper bills in circulation. Now that there are complaints of the overvalued Dollar affecting prices here, there's talk of getting Panama off of the Dollar and onto the Balboa. Not likely to happen, but it's a valiant damn effort nonetheless.

I do think that having their own currency would be a positive step toward carving out a stronger, more unique Panamanian identity and stepping out from under the US' all-encompasing, unavoidable Oprah-like shadow that hangs over this country. Again, would be great. Likely? Even less so than an Oscar for Beyoncé.

One reason for the hate is that, well, "they're heavy," as a student explained.

Granted, here in The Land of Reality, they actually weigh less than a quarter, but I will let her remain entrenched in that belief if it keeps her vagina warm at night.

But I can absolutely see how it's much more cumbersome to fish 'round in your white bra for $5 in sweaty coins at checkout than it is to whip out a wad of breast-moistened bills.

Before placing $12 million of the acquired $40 million in shiny coins into circulation, the Thugministration claimed that it's as simple as coins lasting longer and being better for the environment than paper money. But some Panamanians don't believe that shit.

In short: Imagine if George Bush printed a new currency with his likeness and cited concern for the environment as his reason.

I would sooner transact using sacks of feces than to use a bill bearing Georgie Bush's beady eyed face.

Similar reaction here. There is a segment of the population that dislikes the coin simply because of its association with homeboy. Mind you, the coins do not bear his face, but a friend explained that "la mayoría de los panameños no tienen mente compleja y les da rabia que Martinelli sacó una moneda nueva." (the majority of Panamanians don't have a complex mind and it pisses them off that Martinelli minted a new coin.)

Two: Panamanians aren't so fond of change. Panama recently switched its Metrobus system over to a reloadable card rather than having drivers handle money.

WHATCHU MEAN I CAN'T JUST HAND MAURICIO MY QUARTER?
SO WHEN YOU SAY 'RELOADABLE CARD,' YOU MEAN I CAN LOAD IT AGAIN OR....?

There was a revolt over the card's $2 fee. There was confusion over where and how to reload it. There were op-eds. There were exposés on the news. People threw themselves from buildings in anger. Twas a mess.

Same with the Balboa coin. YOU MEAN, I HAVE TO CARRY ANOTHER COIN?

I've had taxi drivers reply, when I'd hand them 2 Balboa coins for my ride, "Ey compa, no acepto esos foking Martinellis" (or, "Look, motherfucker, I don't want that Bastard's coins, so try again, bitch."). While the solution is to instruct them to eat shit and die take the coins and deal.

Panama Tip #412: This is the Wild West. Anything goes. Anywhere. Especially in taxis. And clothing store fitting rooms.

Given that many Panamanians view President Ricardo Martinelli as dictator/Thug In Chief, carrying around a coin that is sometime known as a "Martinelli" is not always what's good in the streets.

A friend in retail says the coins are better because paper bills stick together and make life counting bills rapidly more difficult at times. I understand this.

Personally, I love the coins, because I find them in random places around my room, in old jeans, and ya know, finding money makes my dick feel just a wee bit bigger.

Last night, when giving change to a participant in my weekly Group Conversation Classes, I dug into my pocket and slid three Martinellis across the table.

All ColombiWaiters in the restaurant paused and turned toward us.

The bisonly man at the next table whose breathing pattern suggested he was marinating cornish hens in his nasal cavity held his breath.

My student looked at me as if I'd stirred her coffee with my dick.

...and I smoothly withdrew the coins, replaced them with paper bills, gathered my things, bid everyone farewell and disappeared into the night.