in search of an American breakfast.

August 01, 2011
About two weeks into my trip, I'd experienced many of the various versions of the Panamanian breakfast situation. More often than not, especially when eating on the go as I have been, the meal will include something fried. 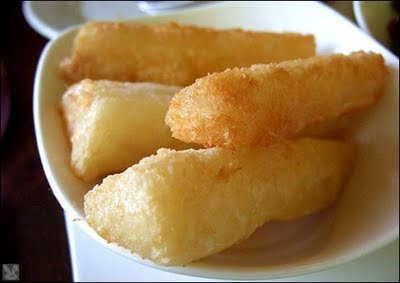 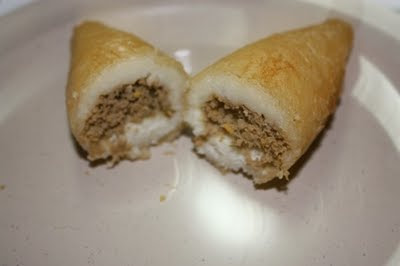 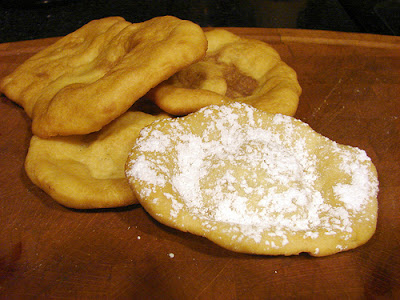 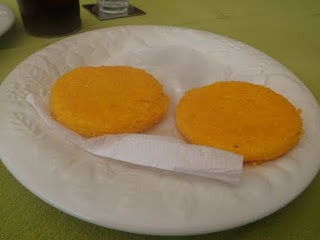 With all the walking around I do on a daily basis, I don't necessarily like to fill up on greasy things so early in the day. Sure, I should be blending into the Panamanian way of life, but last week, I craved something familiar.


The last time I crossed paths with the sweet and magical breakfast delight was at The Waffle in Los Angeles.

So, perhaps I was setting myself up for failure expecting something...similar...here. At any rate, off I went to Cafe Coca Cola.
They claim the title of oldest cafe in Panama City. Opening in 1875, the landmark in Casco Viejo has lots of history, even once hosting Che Guevera and the beat down of the late Panamanian Vice Presidential Billy Ford.

Jeopardy trivia aside, I was lead here again after an unfavorable first visit. Having just returned from a weekend in Colón with family (where food is leaps and bound above food here in Panamá City), I wandered into Coca Cola in search of a simple meal. My first dish: goddamn combination fried rice. How do you mess up fried rice? The primary flavor: grease. Bland and upsetting. A new friend later told me, "Well, it's a combination.....of rice from different days of the week." This explains a lot. Food in Colón, where the population consists largely of Panamanians of West Indian descent, was rich and flavorful. Even the Chinese food was among the best I've ever had...even BETTER than Chinese food from Brooklyn, which says a great deal.

At any rate, I knew I wanted French Toast. First question: Would they serve French Toast? Upon sitting at the counter, I spotted an old friend:

That it was the health-conscious LITE version of the busty, wide-hipped Auntie I was used to stateside, I wasn't too alarmed initially. Hell, syrup is syrup, right? More on this later.

Browsing the menu, I saw quickly that I was in luck:

see: Tostadas a La Francesa at the bottom. 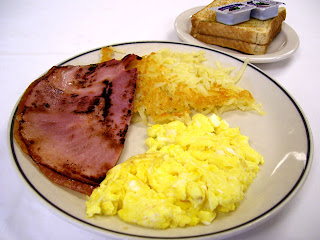 Sounded close enough to me, so I was game. I'd previously read about the no-nonsense waitresses. Here they were before me, in all their unsmiling, I'd-rather-be-drawing-on-my-eyebrows glory. I almost felt as if my order was an inconvenience, interrupting her intense texting. At 11 AM, there was no sausage or bacon. Only ham. Deep sigh. Scrambled eggs and ham. Cafe con leche. Jugo de Naranja. Read the local paper as I waited.

Clearly, I was still wearing my American hat. Without thinking much of it, I was anticipating something like the dish at the right.

It matters not where I am dining. It's a personal rule. I must smell what I'm eating, especially if I'm eating a dish for the first time. If It doesn't smell good, it probably won't taste good. Some of you Vaginal Explorers can probably attest to this rule of thumb.

Smelled edible. Reached for the syrup. Poured on one piece. Tasted. Sure, this'll work. Not sex-on-your-first-night-in-a-new-country good, but I smashed it nonetheless. Only downside: you know how, after squeezing syrup from the bottle, there's typically a string of it that drips down the side the side and sticks to the cap and such? Yeah, none of that happened. It's part of the gluttonous experience, dammit! As soon as you release the pressure from the sides of the bottle, it sucks back up inside like retreating snot. I, however, attribute it to the demonic qualities of a food labeled LITE, as opposed to a varied product recipe in a different country.

I had completely forgot that, here, "____ and eggs" often means the accompanying meat will be diced and combined with the eggs. However, unless there are veggies involved, I like my meat and eggs segregated.
|  | <---- eggs over here. meat over here. -----> |  |
So, there was that. Even before smelling the eggs, the first word that came to mind was "struggle." Perhaps it was just that they were scrambled quite hard before serving. Smelled. Paused. Smelled again. Shrugged. Tasted. Paused. Smelled again.

A chef (used loosely) was leaning against a wall in front of me, sipping a coffee. He appeared to be searching my face for a reaction to the food. Either that, or he wanted to go a round in the back, but I'll stick with "searching for a reaction." Only because he stood watching, because I didn't want to be rude, and because I know not to cause friction with people who handle your food, I took a few more bites. I gulped the coffee and juice, paid, and left.


before
i even
hit
the door,
i knew
something
was
wrong.

Not "oh, this bitch shortchanged me" wrong.


I hadn't eaten an egg that wasn't mixed into something else in almost a month. Instantly, I remembered how much I love scrambled eggs (with cheese) despite the fierce hate eggs possess towards my innards and me. Leaving the cafe, I paused to gather my thoughts. Calculated the distance to the apartment. Continue with errands or power walk home?


Needless to say, I spent much of the afternoon within ten feet of a toilet. Still not sure whether to attribute it to a personal issue with eggs or Satan's handiwork. At any rate, unless EVERY other restaurant in the country of Panamá is closed and all of the fruit on the trees has died and every gummy worm in the hemisphere has disappeared, I will not be returning to Cafe Cola Cola.


upside to the day: relentless diarrhea does wonders for the waistline.


all feedback is welcomed. yes, even those of you in the Bronx.|be notified of new posts: Subscribe
food Panama