thank you, oh cynical one.

I moved to Los Angeles sight unseen on July 1, 2009. I had purchased a one-way ticket and was in search of a new life. Then, I was a dancer. A dancer! I had plans to continue my professional training and eventually land a gig dancing beside a marginally talented pop star. I was even down to hump a choreographer or two either for kicks or a gig. Whichever. You know, sacrifices.

I was skinny, eager, taking between 12 and 15 classes a week, and ready to do whatever was necessary to make it.

Or so I thought.

Having long and glorious hair is great in a more pedestrian, "regular-person" lifestyle. A writer or television personality with dopetastic hair would be super cool. But dance is about blending in. Looking like the other 5-9 male dancers on the stage beside you, as far as the commercial dance world is concerned. Not taking too much attention from the star, etc. There are probably less than 5 working male dancers with dreads. By "working," I mean "booking tours." My brother is an established dancer who had danced for a handful of music acts, been on tour a half dozen times, and even he was asked to consider chopping his fro for a Christina Aguilera video...with no guarantee of future work.

So, while the little dancer boys loved my hair (whew) and physique, It wasn't enough to get me to the next level. 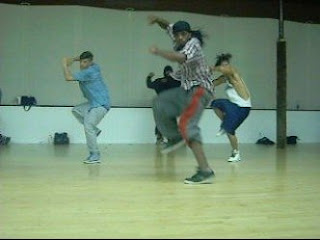 "If you were really ready to work professionally, you would seriously consider cutting your hair," a favorite choreographer/teacher told me.

There wasn't really a question. So, that was the beginning of the end of that for me.

No: my hair did not kill my love of dance. It just opened my eyes to the fact that maybe I wasn't ready to put in the necessary work to reach the "professional" level.

Then, I saw much of the dance world first-hand, and didn't adore all that I saw. Still growing out of my introversion, much of the socializing and dick-riding (figurative: no, literal: maybe, if the mood was right) required to make it and align myself with big names was beyond me. I just couldn't. Add to that the fact that I stilled lived and performed comfortably inside of a shell, dance-wise...and yeah, not much room for growth. I was average at best, apparently. "You're, like, ALMOST there," I'd hear repeatedly.

After three years in New York, I still had no "dance clique" to speak of, as much as I tried (shoutout to Jamie J & Co.) and though I had associates in the LA dance world, very few crossed the line from nonsexual acquaintance to FRIEND. Just never happened. But, I did honestly try. Landing there, I was still socially awkward and introverted, and making friends was still a challenge. If nothing else resulted from my first months there, I became really good at being a loner.


Enter Michael Arceneaux, the Houston-bred writer behind The Cynical Ones and endless source of inspiration. We crossed paths in the kitchen of a heauxmeaux house party, and connected over a private hoodrat dance moment at a gathering where the rest of the fancy geighs where too fly to drop it low. Sure, I pretended to be versed in all he latest cool kid dance moves, but in the cramped kitchen of the fancy gay shindig, sipping heavy-handed cocktails, we were the only people who actually danced. It worked. We clicked. I fell in love with him and his gang of bitches (Shani, Candy, and Jayde, the only nondumpy vaginas at said party) and have loved him ever since.

He has kept me sane, seen me at my worst and most emotionally vulnerable, not judged my low moments and fat kid indulgences, and helped me through tough spots along the way. As a writer for AOL, The Grio, and a host of other online publications, Michael makes me want to be a better writer. His voice is clear, polished, confident. He pulls the reader in with ease, and, despite how he feels about his work, I love everything that he writes. That, and he is (also) a master of the insult. So pay homage.

I wasn't expecting to connect with anyone the way I latched onto Michael. In that insane plastic ass city, a genuine, honest person who'll lovingly put you in your place is needed and appreciated. I couldn't have survived in Los Angeles without someone like him. Those first six months were hell; every day I asked myself, "Why did I move here?" As he drove me to the airport to leave LA, I confessed that if I hadn't met him, I wouldn't have stayed there as long as I did. It got pretty in the beginning. When I pulled back from the dance world, many of the social connections I'd relied on until that moment melted instantly. That in itself speaks to the strength of those "bonds." Michael eased that transition from DANCER to normal person. In him, I found one of the smartest, most hilarious, real men in the entire city. While most geighs and cool kids in Los Angeles chased status and coasted through "adulthood" in a cocaine-coated bubble of pretentious, emotionally unavailable stupidity, Michael was the West coast version of the decade-long trusted friendships I'd cherished in New York. All in less than two years.

Thank you, Michael. We promised each other we wouldn't get mushy and shit in person, but we didn't mention the internet.

I love you and shit.


The Cynical Ones
Twitter
The Grio
The Root
friends life