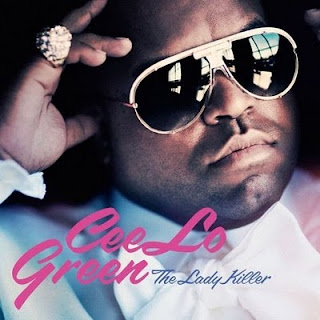 Waiting for the release of a Cee-Lo album is like anticipating the end of a BET Awards show. It's painful. His projects are epic by default and serve as a breath of fresh air in a market populated with junkie rappers, professional victims, self-important pseudo-martyrs and goons named Waka. The designation "good music" is purely subjective but risk-taking (and talent) should be a requirement in 2010. His unbridled, something-for-everyone work with Gnarls Barkley on the collective's two releases The Odd Couple and St. Elsewhere won me over and clearly demonstrated his genius and versatility.

Enter The Lady Killer, Cee-Lo Green's first official solo disc in six years. Prior to its release, Mr. Green treated fans to a masterful mixtape, Stray Bullets (see: "ChamPain") and debuted a handful of the album's tracks via his website and Youtube page. To say that "F*ck You" was a hit would be a huge understatement, kind of like saying "Soulja Boy Annoy 'Em is bad." Who doesn't love a well-sung, stinging send-off? The song was everywhere, with William Shatner's recent interpretation officially signaling its overkill.

Leading off the album is "Bright Lights Bigger City," perhaps the most pop radio-friendly song herein. With a vintage Michael Jackson bassline, it's the perfect riding song to jump-start a night of Harlem Shakin' and Two Buck Chuck bottle poppin'. Another standout, " Love Gun," featuring Lauren Bennett on lead, was appropriately yanked from Pussycat Dolls' second fiddle, the nasal songstress herself, Melody Thornton. The spy movie guitar strums play into the overall playboy/assassin theme. "Bodies" sees Cee-Lo at his lyrical best flowing over a smooth, eerie grove. The album's closer, "No One's Gonna Love You," is perfection, as I'm a sucker for a big, sweeping ballad.

The Cee-Lo Green brand of magic is absolutely necessary in this musical climate. Though noticeably restrained compared to his otherworldy Gnarls Barkley masterpieces, there are several gems present here. Whether singing modernized Motownesque love declarations or detailing stringless sexual exploits, the Soul Machine delivered yet another solid entry in his stellar catalog. This is hardly his best album. He's simply doing what we expect of him, making enjoyable, better-than-most-of-his-peers, timeless music. Support greatness. Support one of the most sanginest sangin big man (not named Luther) who ever sang. You won't be disappointed.

all feedback is welcomed. yes, even those of you in the Bronx.|be notified of new posts: Subscribe
Cee-Lo Music writing