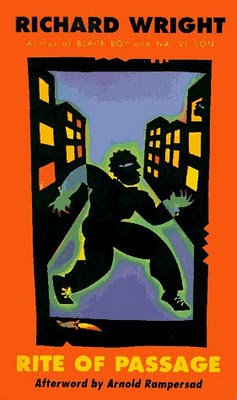 I just finished Richard Wright's Rite of Passage. This is a short story about Johnny Gibbs, a teenager who runs away from home after finding out his family is actually a foster family, and that he's being sent to live with in a new home later that night.

At just over 100 pages, Rite of Passage is a quick, easy read. Having read several of Wrights other novels and short story collections, this book only strengthens my love for this man's work. Like many of his other titles, one of the prevailing themes in this book is (sudden) loss of innocence. Here, protagonist Johnny Gibbs runs away and falls in with a group of wayward boys, going from loved son and promising student to street gang leader within the course of 24-hours.


Similar to Bigger Thomas in Wright's Native Son (my favorite book ever), Gibbs makes a spit-second decision that alters the course of his once-predictable life, thrusting the teen into a world of adult decisions, riddled with self-doubt, guilt, and a skewed sense of manhood. Wright's common themes of survival (running away without a plan, only the will to live) and unaffected white power and influence (powerful Social workers, corrupt police and well-intentioned but untrustworthy teachers) are also present here. This all speaks to the social climate in which the writer existed. During this time, writers used their literature to convey messages, voice disdain for bureaucracies that governed them, and incite passion in the public. A well-written, often not-so-subtle jab at authority and commentary on the then current socioeconomic state, if you will.

As evidenced here, Wright definitely mastered use of his craft for the greater good. The mix of juvenile logic and endearing flaws in both Native Son's Bigger Thomas and Rite of Passage's Johnny Gibbs ultimately make both boys likeable and commendable in their journeys. Though they resort to crime while on the run, at the core, they both just want to return to their loving mothers and the homes they left behind.

This story of yet another of Wright's "grown boys" adapting to ever-changing circumstances while forging his way in a man's world would be enjoyable to anyone appreciative of Richard Wright's brand of storytelling. If you haven't been exposed to his brilliance, I'd suggest his gripping autobiography, Black Boy.

A powerful, graphically detailed read, the autobiography explores his early life on a Tennessee plantation, work as a young Communist Party member, and how he handles rejection from both his father and the Black (literary) community as a whole.

Then: read Native Son. You won't be able to put it down. Trust me.

Up next for me: Black Power, also by Richard Wright. It's his account of his first trip to Africa, specifically Ghana, as well as an essay collection entitled White Man, Listen!. I'll keep you posted on this one.

~colored boy
all feedback is welcomed. yes, even those of you in the Bronx.|be notified of new posts: Subscribe
books Richard Wright