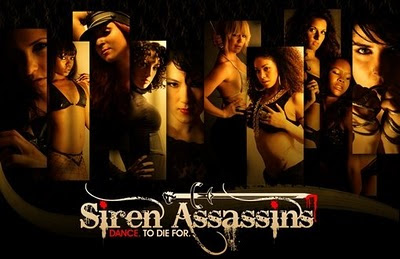 It's a dance show choreographed, conceived, and directed by Rhapsody James, who choreographed "Freakum Dress" and "Get Me Bodied" for Beyonce, as well as videos for Cassie and the Pussycat Dolls. I spent a lot of time in her class in New York. She is one of my absolute favorite choreographers and teachers. Her style is recognizable, unique, and makes me strive to be a better dancer.


To see this show, which she's been developed for years, was to be inspired. Rhapsody's project, Siren Assassins, features female dancers starring as Sirens, each with  a distinct mood, theme, motive, and style.  Rhapsody has described Siren Assassins as "Cell Block Tango" meets Kill Bill. She's produced the show on a smaller scale in New York previously, but finally brought the grand multimedia spectacle to the West coast. 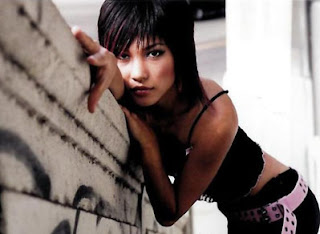 Rino Nakasone Azalan, who portrayed QUEEN JADE
For many of the show's attendees, the highlight was witnessing Rino Nakasone Azalan (Beat Freaks, America's Best Dance Crew, Britney Spears, Janet Jackson) as Queen Jade: The Heiress. Rino's probably best known as a part of the female dance crew, The Beat Freaks, dancing alongside vets Teresa Espinosa and Allison Faulk. Seeing Rino assume this role, leading the dancers in this awe-inspiring piece, was a welcome break from how we normally see her. Not to discredit the rest of the show, but this piece appeared to be the most consistent, thought-out piece in terms of style, choreography, costuming and theme. The audience gave this act a standing ovation well before the piece ended.

The brilliant men that support Rino are Joesar Alva (of Boogie Bots, among my favorite teachers at Debbie Reynolds), JP San Pedro (fresh off Britney Spears' Circus Tour), Lyle Beniga (whose choreography can be seen in the recent Fame remake), and phenomenal rising star, Sohey Sugihara.

Siren Assassins also featured several other amazing women, including Dana Foglia, Lisette Bustamente, Chonique Sneed, Janelle Cambridge, and Ksyn Carson. Rhapsody has alluded to plans to take the Sirens show to other major cities and can otherwise be found teaching at Broadway Dance Center in New York or as part of the Monsters of Hip Hop faculty.

Other highlights from Rhapsody James:

Choreography to Janet Jackson's "Make Me"

all feedback is welcomed. yes, even those of you in the Bronx.|be notified of new posts: Subscribe
dance Los Angeles