En route to Los Angeles (literally, in the air as I type this). After rushing to the airport, my flight was delayed, in addition to all planes being grounded for weather. In the interim, the incoming flight was redirected to Ohio "to refuel", and finally arrived at 8:55. With the deplaning, cleaning, and 30 minutes of chillin' on the runway, we didn't take off until 9:46, rather than 5:35. Of course, I missed my connecting flight in Denver. So, I got to spend the night wandering around Denver International Airport, exhausted, brokedown and (I discovered) ashy as hell (like…white ankles ashy), until this 7:15AM flight. Good fucking times. 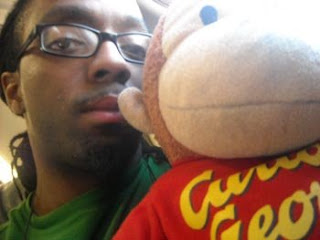 my long-time flight companion, Curious George and me.


The past 24 hours has been a whirlwind of emotions that I had purposely put off until the last possible moment. I was FINE until I went to meet Dre for our traditional lunch of $5 footlongs (both chicken breast on honey oat!) yesterday. I turned onto 5th Avenue, and it began. Shit. I hit 41st and got choked up. By 40th I felt it coming hard and fast. On 39th tears were forming. And when he turned the corner, I was a ridiculous, blubbering mess, in the middle of 5th Avenue. Sexy, right? Again, too many suppressed emotions coming out at once. This boy has been, essentially, my ROCK over this past year. I attribute my survival and sanity from that tragic breakup (literally, it crashed and burned) last winter until now to him, largely. We’ve pushed each other to be successful, strong, and amazing in general. He commented, “If it weren’t for you, I wouldn’t be skinny!” True words, indeed. The last quarter of 2008, we begun round 2 of our fitness obsession. We’d call/text each other religiously, sharing our progress for the day (“YO! I just did an hour of cardio and I feel amazing!”), pushing each other to do more, more, more. The results are quite obvious, and I’ll always think of him when I find an old pair of size 34 (gasp!) jeans.

Anywho…being the award-winning procrastinator that I am, I didn't really begin preparing for the move until late biggest last week, leading to yesterday's frenzied pace.

I just realized the scale of such a move. What will take some adjusting to is the fact that I'm no longer a 6-hour Chinatown bus ride from my parents. I won't be able to call up my best friends and tell them to meet me in Union Square in twenty minutes. I'm leaving my comfort zone of friends and associates to, essentially, start over in Los Angeles. This is major for me. I’ll be forced to blossom socially. I’m told that I’m more outgoing and confident than before, and I will be forced to continue growing, and to adapt quickly. I do have a sense of adventure and always welcome change, so this new phase shall be quite interesting.

Monday night, I had a beautiful, intimate dinner with some of my closest friends (with one notable absence). I chose Asian (just the restaurant name, not the cuisine offered...go figure) because we've had many great times there. On New Year’s Eve, about a dozen of us got trashed there and took all kinds of trashy pictures. Two people (friends) ended up doing the tongue tango, and Dre and I reenacted choreo from the Rock Witchu Tour, full out, for no particular reason. Good times. On Dre's birthday, we wound up here after dinner. Twas my first and last time drinking until I vomited. As I stumbled home, I bargained with God, "If you end the tornado in my stomach, I'll never drink again." Apparently God knew I was lying. And then I threw up my entire childhood. Oh joy.

On Monday, though, the mood was much more relaxed. As I walked up, I kept telling myself, "This is going to suck." I wanted to see everyone one last time, but I. hate. goodbyes. Numerous times, someone would hit me with an exaggerated sad face, or a "Please don't go!" Mechanically, I'd shoot back, "Stop it!" Up until then, I'd successfully kept myself overwhelmingly busy (even fought off a few panic attacks) to avoid getting emotional.

All went well, until this bitch Inez announces, "Let's go around the table and all say why we love Alex."

So it began. One outpouring after another. Some cried, some didn't. I held it together, cause "I aint no punk bitch" (copyright - Rayona Young, 2007). I knew I was loved. I was sure of it. Individually, we'd all been through trials and events that brought us closer, without fail. However, you NEVER really know how much you have affected someone else. Things that are completely natural to you may have a life-changing effect on someone else. Everyone's remarks further confirmed that I was on the right path in life. As of late, I'd felt incredibly shitty about leaving. I felt guilty for leaving. However, I relate this experience with my move to New York in 2006. Then, like now, I had to put all outside influences aside and make a completely selfish decision, regardless of how it affected others. And now, as I fly across the mountains of Colorado, I'm once again overcome with a sense of peace. Finally.